When good robots go bad – or even mean towards humans 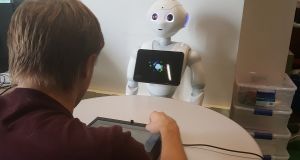 I should probably explain. This is an experiment from Carnegie Mellon University where the unwitting Pepper has been programmed to be rude to people with whom it interacts. Participants were asked to play a game with Pepper and their reactions observed when the diminutive robot said things like: “I have to say you are a terrible player” or “over the course of the game your playing has become confused”. I know. Mean, right?

The results indicate that people perform better at the game when the robot is nice to them and, conversely, perform poorly when Pepper is pretty prickly.

“This is one of the first studies of human-robot interaction in an environment where they are not co-operating. We can expect home assistants to be co-operative but, in situations such as online shopping, they may not have the same goals as we do,” explained Fei Fang, co-author of the study and an assistant professor in the Institute for Software Research at the university.