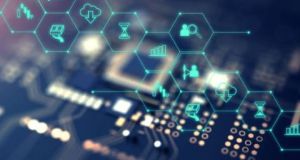 Startups can feature strongly on the emerging blockchain landscape because “there are no barriers to entry as long as you understand the technology and see the whole new wave of possibilities”. File photograph: iStockPhoto

Most people, if they have heard of blockchain technology, still associate it with just one of its many possible uses: the cryptocurrency Bitcoin.

The blockchain is an essential element of Bitcoin, or any other cryptocurrency. An open, public, tamper-proof ledger for transactions, blockchain permanently links and locks timestamped individual digital records (called blocks) together into indelible chains.

Since Bitcoin and blockchain’s invention in 2008, the hype (and there is plenty) has focused almost entirely on the cryptocurrency, which removes the massive corporate and state infrastructures needed for our long-accepted, dominant form of value exchange: paper money.

No state issues cryptocurrencies, no central or national banks are needed to distribute and manage them, no government officials can decide to inflate or devalue them, and the record of each coin’s creation and lifetime of use is locked into a publicly viewable blockchain record.

Transactions happen directly and immediately, without intermediary, between payer and payee. The blockchain - implemented globally without a central administrator - is the complete, fraud-free trust and transaction infrastructure, extraordinary in coding and concept.

Now, many are as intrigued by the blockchain as the currencies. A tamper-proof, time-stamped, open ledger? Why, that could have many applications for financial services, insurance, banking, and the law, just for a start.

Still, ideas and chatter about the blockchain have been more common than actual projects and implementations. But that’s beginning to change, as an event last week at IBM Research Ireland demonstrated. First off, the very fact that tech giant IBM has research groups focused on blockchain, one of which is based in Ireland, highlights the seriousness with which blockchain applications are being explored.

And it’s not just IBM but pretty much all the big business-focused tech firms with global reach: Microsoft, Infosys, EMC, Dell. Many, including IBM,  are involved with the Linux Foundation-run Hyperledger project, “an open source collaborative effort created to advance cross-industry blockchain technologies”, as it describes itself.

Rupert Colchester, Blockchain Leader for IBM UK and Ireland, noted last week that Hyperledger “is the fastest growing Linux Foundation project, ever”. The Hyperledger website states: “Not since the Web itself has a technology promised broader and more fundamental revolution than blockchain technology.”

Extraordinary claims, yes, but it is extraordinary and potentially revolutionary technology. But the latter bit is tricky. “Revolutionary” means there will be inherent, entrenched resistance to change from the sectors directly impacted, the intermediaries that lose their roles.

Yet, the sectors showing projects at the IBM event were exactly those conservative, slow-to-change sectors: financial services, banks, transport.

IBM discussed an internal implementation for invoicing that enables the company to have detailed data for queries and disputes (IBM has to resolve 25,000 of them annually). Head of IBM Research Ireland, Wendy Belluomini, presented a project done with shipping giant Maersk “that can digitise global trade”.

A single shipment - say, of avocados from Africa to Europe - might go through 30 parties and intermediaries, with 200 information exchanges. Paperwork adds as much to the total cost of a shipment as the transport, she noted.

While some intermediary functions would be lost, other opportunities are created by using blockchain technology, including cost-savings through fraud reduction, faster and easier resolution of disputes, swifter transfers of funds, easier tracking and monitoring of goods.

Notably, those who have implemented the pilots were uniformly positive about using blockchain, from Northern Trust to Ornua (formerly the Irish Dairy Board).

A closing panel, which included the Bank of Ireland, Ornua, IDA Ireland and the Blockchain Association of Ireland (blockchainireland.org) , explored both opportunities and challenges - technical and cultural - still to be resolved.

But I left with the strong sense of blockchain having moved significantly down the road of being less hype than a transformative technology force-in-waiting.

Blockchain Association of Ireland director Reuben Godfrey feels that Ireland has a head start on many other countries in having both large tech companies and numerous startups interested in using blockchain, as well as tacit state support from organisations such as the IDA.

After the event, he told me there’s hype around the blockchain, yes, “but warranted hype”. He expects the technology to be adopted faster and more widely than predicted.

Startups can feature strongly on the emerging blockchain landscape because “there are no barriers to entry as long as you understand the technology and see the whole new wave of possibilities”.

An area to watch, in Ireland and abroad, for sure.