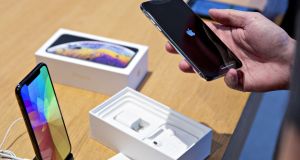 AMS, which supplies Apple with sensors for its Face ID technology, disappointed investors with a 58 percent decline in fourth quarter core profit, its guidance and the suspension of a dividend payment for 2018.

The Austrian group shied away on Tuesday from a full-year earnings forecast after a downturn in 2018 results, saying shorter order cycles reduced visibility in a difficult market environment.

Investors punished the Swiss-listed firm’s already battered shares also for its decision to no longer provide a mid-term guidance figure, sending the stock down 15 per cent.

The shares tumbled 75 per cent last year while the European sector index lost 11 percent and Apple shares 9 per cent.

“Given a market we are seeing that is very volatile and hard to read and also demand that is smaller than we had envisaged, we see first quarter sales of $350-390 million,” chief executive Alexander Everke said at a news conference in Zurich.

That is a fall of more than 20 per cent compared to last year’s period and to the fourth-quarter.

“Certainly we see the second half of the year 2019 better than the first half,” Mr Everke said on an investor call, when asked about earnings prospects but did not give details.

AMS’ statement added to a bleak earnings season for semiconductor companies and further stoked fears of an industry slowdown after sales warnings from Apple, Samsung and Taiwan Semiconductor last month pointed to stagnating smartphone demand and a cooling Chinese economy.

AMS provides Apple with optical sensors for 3D facial recognition features on its newest iPhones and has been hit by slow sales of the devices. Technological challenges have made it hard for AMS to reduce its dependency on Apple, which analysts estimate accounts for 45 per cent of sales.

Management was, however, optimistic in this regard.

“We do have a significantly better pipeline for the Android mobile business for the first quarter and also second quarter and the quarters to come. This is a big difference to last year,” Mr Everke said on the investor call.

So far, China’s Xiaomi is the only maker of Android-based smartphones that AMS has disclosed as a customer. Analysts say Huawei’s Mate20 Pro phones also use AMS’s sensors.

Analysts pointed to another challenge for the firm after AMS reported a 38 percent increase in net debt end-December and a 46 percent fall in its order backlog.

“Market focus is going to be on the cash generation (and) debt management before focus shifts to any new wins that will aid 2020 development given the difficult 2019 environment,” JP Morgan analysts said.

The group is still considering options for its business with environmental sensors but has already switched staff from that unit to new projects, Everke said.

After a strategic review, AMS in October decided to reduce its focus on environmental sensors, which detect temperature or moisture.

Asked about market speculation that rivals might be interested in buying AMS, he said: “Our strategy is to stay independent.” – Reuters