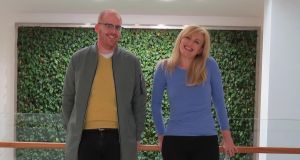 Established in Tralee, Co Kerry, by Shane Hassett and Mariana Kobal four years ago, the fast-growing company is seeking to become the world’s largest supplier of 3D-printed consumer products.

Wazp, which previously raised €1 million from backers including Enterprise Ireland, said the latest fundraising comes from a group of Irish private investors.

Mr Hassett, Wazp’s chief executive, said the funding would be used to help scale the company. “Over the last four years we’ve made some major strides in volume 3D printing for clients and we now want to build on what we’ve learned and make the most of what is a booming market,” he said.

“We intend to use the investment to solidify our footprint in Europe and expand our production capabilities into the US over the next two years,” he added.

Mr Hassett, a trained engineer who along with his business partner has a background in mass manufacturing, said companies are slowly beginning to move beyond simply seeking prototypes from Wazp to wishing to collaborate with it to develop and roll out full 3D-printed production on a large scale.

“There has been a huge education process undertaken by us to outline the value propositions associated with mass-producing 3D products because some enterprise-level companies can find it all a bit scary. However, many are now looking to go beyond simple prototyping to mass-producing 3D-printed products,” he said.

The company, whose chairman is former Musgrave and Kerry group HR director Adrian Grey, has previously been quoted as saying it is targeting turnover of about €20 million by 2020. Mr Hassett wouldn’t comment on projected revenues but did say he expected strong growth in the coming years.

“Our turnover has grown at least five times every year for the last three years and that is expected to continue into 2019 and 2020,” he said.