War at Microsoft over military use of mixed reality 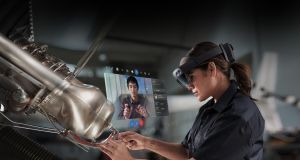 A factory worker using HoloLens2. Microsoft Workers 4 Good say that intent to harm is an unacceptable use of HoloLens technology

With the arrival of HoloLens 2, some Microsoft employees have raised concerns about how these mixed-reality headsets will be put to use, specifically citing the ethical implications of the Redmond tech company’s contract with the US army.

The group of concerned employees, known as Microsoft Workers 4 Good, tweeted: “On behalf of workers at Microsoft, we’re releasing an open letter to Brad Smith and Satya Nadella, demanding for the cancellation of the IVAS contract with a call for stricter ethical guidelines.”

This is in reference to the $479 million Integrated Visual Augmentation System (IVAS) contract Microsoft was awarded in November 2018. According to the US army document shared by Microsoft Workers 4 Good, the objective is to “rapidly develop, test and manufacture a single platform that soldiers can use to fight, rehearse and train that provides increased lethality, mobility and situational awareness necessary to achieve overmatch against our current and future adversaries”.

In their open letter, titled “HoloLens for Good, not War”, these employees say that intent to harm is an unacceptable use of HoloLens technology and demand the appointment of an external ethics review board to ensure the technology is put to acceptable use.