Vodafone to invest €500m over next three years in Ireland 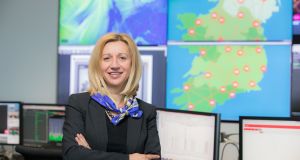 Vodafone Ireland plans to spend €500 million over the next three years across mobile, broadband, fibre to the home, network infrastructure and customer care systems.

The commitment comes after the telecommunications company said it has become the first Irish operator to achieve gigabit speeds on its mobile network under a trial operated in Dublin.

While Vodafone’s mobile subscribers in the State dipped below two million in the year to last March for the first time in more than a decade – and stood at 1.97 million at the end of December 2016 – customer’s data usage has been soaring amid an ongoing shift to fourth-generation (4G) devices.

In 2015, it also went about trying to break Eir’s grip on the broadband market as it began to roll out a fibre-to-the-home network with speeds of up to a gigabit per second with ESB. The €450 million joint venture, called Siro, aims to reach up to 500,000 homes and businesses in small towns by 2019.

“We’ve always prioritised our strategic investment plan to ensure that our customers receive and enjoy a seamless connected experience,” said Madalina Suceveanu, chief technology officer at Vodafone Ireland. “In the last year alone, we’ve completed our nationwide network upgrade, improving our existing voice and data services, as well as further increasing our 4G footprint to over 95 per cent of the population.”

A spokesman for Vodafone Ireland said that the €500 million of planned capital expenditure unveiled on Monday will bring to €1.35 billion of investment committed by the company over a seven-year period.

Meanwhile, Vodafone Ireland said its narrowband internet of things (NB-IoT) network is being trialled and will be commercially available during the summer. This technology will connect millions of devices to the internet.