Slack valued at more than $20bn in stock market debut 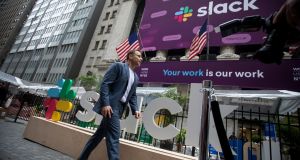 Stewart Butterfield, ceo of Slack Technologies, said the company had been hoping to avoid a high premium, which often reflects the scarcity of shares available to investors in a traditional IPO. Photograph: Michael Nagle/Bloomberg

Slack, the workplace chat app with an avid following in Silicon Valley, landed on Wall Street with a $20 billion(€17.7 billion) valuation on Thursday, more than three times what it was worth when it last raised money only nine months ago.

The company’s shares opened at $38.50 and rose as high as $42, marking a smooth start to trading for a rare direct listing on the New York Stock Exchange.

The first trade was confirmed shortly after midday in New York, after traders at Citadel Securities were able to find a clearing price for the initial buy and sell orders flooding to the floor of the exchange. Direct listings do not involve the advance book building or underwriting provided by investment banks in a traditional initial public offering, and do not put any restrictions on shareholder sales.

The opening trades valued the shares 22 per cent above the highest price paid in the private market, implying a moderate first day premium for the shares, in contrast to the huge spikes seen in some other cloud software companies which have carried out traditional IPOs this year. Stewart Butterfield, co-founder and chief executive, said the company had been hoping to avoid a high premium, which often reflects the scarcity of shares available to investors in a traditional IPO.

Despite the moderate Wall Street opening, the early trading still represented a huge windfall for the company’s founders and early backers. Investors who took part in Slack’s $427 million fundraising in September last year paid only $11.91 a share. The opening trades valued Mr Butterfield’s personal stake at $1.6 billion, while Accel, Slack’s largest venture capital investor, was sitting on shares worth $4.6 billion.

Speaking ahead of the first trade, Mr Butterfield acknowledged that there was some risk to allowing the shares to find their own level, and that this could lead to volatility in the share price “in the first day or two”.

However, he argued that this was the best choice given that Slack does not need to raise new capital. “Diluting existing shareholders by 10 per cent didn’t seem prudent,” he said.

Jai Das, president of Sapphire Ventures, a Silicon Valley venture capital firm, said that most technology companies needed to raise money at the time of a Wall Street listing and so were not in a position to follow Slack and do a direct listing, where no new shares are sold.

But he added that Slack had only been able to go down this route now because it had raised such a large amount of money last year. Since it sold the shares at a much lower price in that fundraising, the move diluted its shareholders more than if it had raised money now.

Spotify was the first big company to conduct a direct listing on Wall Street when its shares started trading in April last year. The technique, which saves on underwriting fees and the extra dilution that comes from selling extra shares, provoked considerable interest from other companies looking to go public, though Slack is the only one so far to have followed suit.

Alan Shim, Slack’s chief financial officer, said that using a direct listing would avoid distorting the market by artificially restricting supply. “When you have unrestricted supply and demand, the market finds a level. We want the market to do its job,” he said.

Slack’s debut on Wall Street comes while it is still loss-making and as its growth rate slows sharply. It recently forecast revenue growth of 47-50 per cent this year, down from 82 per cent last year.

The losses reflect the fact that the company “is spending heavily on marketing”, said Alejandro Ortiz, principal analyst at SharesPost. He added that Slack faces a challenge in maintaining its growth as it moves into the mainstream business software market, where it will face greater competition from Microsoft and others.

“It has kind of a cult following, it’s a Silicon Valley darling,” Mr Ortiz said. “The problem it will have is in getting into really large companies.” – Copyright The Financial Times Limited 2019