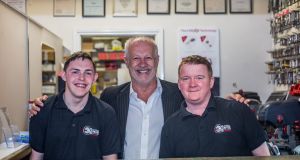 Dubliner Dave O’Toole is the first to admit that he isn’t your typical ‘tech bro’. At the age of 60 and having spent more than 30 years working as a locksmith, he is likely to have associated a hackathon with a bad cough not so long ago.

But having just walked away as the winner of a start-up bootcamp in the heart of Silicon Valley, the Irishman is keen to make the most of his newly-found success.

“Enterprise Ireland are keen for me to scale up the business quickly. My initial idea was to do something small employing maybe five or six people, but I’ve had expressions of interest from some major players and this will likely mean getting in another person to drive things forward,” he added.

Mr O’Toole, who has owned a locksmith business on Amiens Street for the past 20 years, won out against 120 other entrepreneurs for his ‘Touch Smart Lock’ solution, which was voted ‘the product with the best potential’ in the competition, organised by crowdfunding company Indiegogo in association with telecoms giant AT&T and fellow Fortune 500 company Arrow Electronics.

The solution, which he developed after he became aware of his mother struggled to open her front door after suffering a stroke, has taken five years to develop. It allows authorised users to open doors by gently touching a key fob rather than having to find keys or use access codes.

AT&T and Arrow, an electronics components giant, have indicated offering further support for Mr O’Toole, with the latter providing certification for the technology, in a move that gives it added credibility.

“The company behind August Home, which is the best-selling smart-lock maker on the market, was acquired by Assa Abloy for over $60 million two years ago and Assa has expressed an interest in a partnership with me,” said Mr O’Toole.

The businessman is now launching a €1 million crowdfunding campaign to unlock sufficient money to allow him to fully commercialise his prototype.

“In the US alone there are over 630,000 individuals suffering from Parkinson’s disease, 52 million seniors and an estimated 13.4 million people who are visually impaired, so there is a substantial market out there for us,” Mr O’Toole added.

1 This charming man: how Paschal Donohoe won the Eurogroup presidency
2 ‘My rent here is so low it’s a joke’
3 Goodbody’s planned €155m sale to Bank of China falls through
4 ‘Sad day’ for House of Ireland as tourism retailer goes out of business
5 Caveat: The tourism sector deserves to be taken more seriously in this crisis
Real news has value SUBSCRIBE