First to market is overrated, now the experience is key, says Hubspot founder 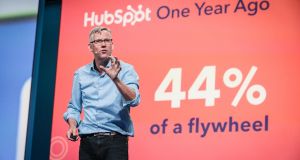 Brian Halligan co-founder of Hubspot: ‘The supply and demand for employees is really out of whack these days; if you’re an engineer, you get 50 job offers’

“Founders are overrated,” Brian Halligan, co-founder of Hubspot, laughs. “If I left tomorrow Hubspot would be fine. We have lots of good talent; they would power on.”

It is something that plenty of technology companies have had to deal with in the recent past: Uber’s chief executive Travis Kalanick resigned in a cloud of controversy and was replaced by Dara Khosrowshahi; and last year Salesforce appointed Keith Block as its co-chief executive alongside founder Marc Benioff. Less successful was Bill Gates making way for Steve Ballmer at Microsoft, but his successor, Satya Nadella, has transformed the company since he stepped into the role in 2014.

“What I’ve been impressed about in the tech industry recently is, it used to be that these tech companies founders would get rich and the founder would get lazy, and the competitors would put a bull’s eye on their back and take them down,” he says. “Big tech companies are much more nimble now. They bring in the new people that go around the founder, their boards are much more active and supportive. They innovate, they move, they acquire, they don’t get tired, slow and lazy. So again, I’m a little bit optimistic on the next generation of leadership.”

Hubspot’s chief executive isn’t going anywhere just yet; he is just being candid about the myth of the founder. Hubspot may be a multimillion dollar revenue company, but it is still relatively young in the grand scheme of the tech industry and Halligan isn’t quite finished with his role yet.

In an industry used to tales of excess, Halligan seems to be more down to earth. Based in Boston, he says none of his friends are tech founders, he doesn’t spend his weekends on private jets and one of his favourite things to do is the semester he spends each year lecturing at the Massachusetts Institute of Technology.

But Hubspot has been Halligan’s project since he and Dharmesh Shah founded it in June 2006 at MIT. It had the initial mission of “marketing is broken” and although it’s not quite fixed yet, it’s certainly a lot better than it used to be. The company initially focused on inbound marketing, a method of attracting customers through social media marketing, content marketing and search engine optimisation, recognising that consumers were blocking out the intrusive methods of trying to get their attention.

Its focus has moved on a little over the years as the market has changed.

“We basically built a platform to let people build lighter, faster, better, delicious customer experiences,” says Halligan. “When I wake up in the morning, I wake up on a Casper mattress and I put on my Warby Parker glasses, and I listen to Spotify. And then I feed my dog with my Chewy food. And then I ride on my Peloton, and I shave with my Dollar Shave Club razor, and I put on my Trunk Club outfit and I go to work in my Uber. All those companies I do business with every morning are startups, they’re new companies, they sell the same damn product as the predecessor companies they disrupted, but they do it with just a better customer experience, a disrupted customer experience. That’s kind of where I feel the opportunity is now, not so much in marketing but in creating these experiences. I see less tech disruption happening on the internet these days, more disruption really in crafting these lighter, faster, automated, great, delicious experiences for the customers. That’s kind of what we’re up to, and what we’re helping our customers to do.”

Hubspot is tracking industry trends, where customers are demanding increasingly high customer service from businesses around the clock and subscriptions are the order of the day – Dollar Shave Club versus Gillette, clothing services versus personal shoppers.

“Everyone talks about time to market; I feel like getting a product first to market is really, really overrated. Getting a disruptive experience to market first is underrated these days,” he says.

“People expect businesses to be open 24 hours a day, seven days a week, 365 days a year. People expect to be able to get it done themselves self-service, they increasingly don’t want to talk to a human. They expect unbelievable service that they can self-serve. And then if they get really stuck, and have to talk to a human, they expect that human to be really sharp and know exactly what the context is before they have the call. The bar has been raised in terms of customer service and customer experience dramatically.”

It has been 13 years since Hubspot officially set up shop and in that time it has expanded significantly. It came to Ireland in 2013, a decision that Halligan was closely involved in.

“I would say it’s far exceeded our expectations as a country, as a place to do business. It’s probably our highest performing office. We have hundreds of people here. And it’s been amazing. It’s absolutely amazing. It’s really worked out marvellously,” he says.

The office is now the European headquarters for the firm. It employs more than 500 people, but it is recruiting, and with the addition of a new building in the Docklands area of Dublin, it has the space to grow to up to 1,400 people.

Equally importantly, it also has a core team of engineers, with 100 staff building new products for the company. The “DubSpot” team was involved in the development of the company’s recently launched Service Hub.

Things have changed though since Hubspot initially landed with a team of nine US executives to set up the Irish office. The goal was to replace those nine with local employees within two years, a deadline that was met.

“If I had to make that decision again, it’d be a more challenging decision because every tech company is here now. The supply and demand is a little different than it used to be,” he says. “There’s only so many people here and the demand for their work is higher, so the prices have gone up. But it’s still a great, great place to do business, like an unbelievable place to do business. We’re delighted we picked here.”

Things could have been very different for Hubspot; London was originally one of the potential locations for the office. With Brexit looming, the decision to locate in Ireland seems particularly prescient for a company that regards EU membership as one of the key strengths of Ireland as a business location.

Tax and the educated workforce played a part too, as did the ability to source multilingual workers. Hubspot has since set up offices in France and Germany to support customers there.

Dublin is continuing to grow though. Although there are issues around attracting and retaining workers, tech companies are finding there are some things that will help their cause in the employment market. It’s not as simple as throwing free snacks and ping pong tables at employees and hoping it will encourage them to stick around. Nap rooms are nice – and something Halligan feels strongly about – but enticing employees is a little more complex than that.

“If you’ve got a great product, it can be like a magnet that will pull in and retain customers, you need to think about your recruiting in the same way,” says Halligan. “You need to think about the culture of your company, if you have a great culture, that’s like a magnet that pulls in developers and employees and retains them. And I think people spend a lot of time thinking about their product and their company; they don’t spend enough time thinking about what is the unique value proposition, what is unique about our culture that will attract potential employees into our business. We compete with all sorts of companies around the world with our software platform. But we compete with a different set of companies when it comes to recruiting. Our value proposition is really our culture.

“The supply and demand for employees is really out of whack these days; if you’re an engineer, you get 50 job offers. I don’t think a great engineer cares that much about that stuff. They want to go to work for somebody that has a mission they can buy into. If your mission, let’s say is to, you know, take resources from the environment and turn them into cash, or if your mission is just getting another three cents a share this quarter, that’s just not a mission that’s going to motivate today’s modern worker. I think mission really matters. Modern employees are much more missionary than they are mercenary, it strikes me and there is a change afoot.”

Change is also key for the company’s products, which is why Hubspot has evolved alongside its customers. In an industry where everything is about disruption, it’s becoming more difficult for companies to come up with new technology to stay at the forefront of the market. It’s all a matter of perspective though.

“I would argue that technology disruptions these days are very rare,” he says. “If you build something cool and new, like a new pen, or a new phone or a new piece of software, it’s a very short lived advantage relative to what it used to be.

“Technology disruption has been happening for a long time; that feels like it’s really slowed down to me. It’s this experience disruption, where it’s the same product offering, just sold in a lighter way that’s easier to consume and the service is better, that’s how I see the world changing.”

That changing world has implications for tech companies. In recent months there has been a backlash against the major players in the tech industry, with talk of forcing breakups of some of the larger companies.

The backlash against the bad behaviour of some tech companies is appropriate, Halligan says, and it could force a positive change in the industry.

“Founders of tech companies are responsible for a lot more than their share price. I think they’re responsible to their employees, their shareholders, to the partners and to the communities. That old-school way of the only thing that matters is the share price and your investor, if you think that way, I just don’t think you will attract the talent you’ll need; you’ll invest in the short term, not the long term, you’ll get into trouble,” Halligan says. “I think this has been a wake-up call in the last few years. I think people are going to start changing their behaviours and their ways, and I think it will improve. I’m optimistic that will improve over the next couple years.”