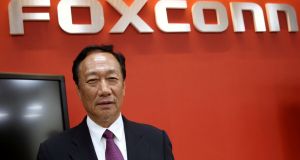 Foxconn boss Terry Gou told the company’s agm in Taipei he would hand over the running of the company to a newly-formed nine-member operations committee. Photograph: Eason Lam/Reuters

Mr Liu was tipped to take over from Mr Gou, who said in April that he planned to step down to pave the way for younger talent to move up the ranks of the world’s biggest electronics contract manufacturer.

Earlier on Friday, Mr Gou told the company’s annual general meeting in Taipei he would hand over the running of the company to a newly-formed nine-member operations committee. Mr Gou retained a seat on the board of the company, formally known as Hon Hai Precision Industry Co Ltd.

The change of guard comes as Foxconn – with its big factories in China and large roster of US clients – navigates a trade war between Washington and Beijing.

Foxconn shares closed down 1.2 per cent on Friday, compared with the flat broader market. – Reuters