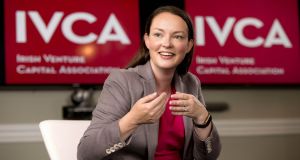 IVCA director-general Sarah-Jane Larkin said seed funding to early-stage companies more than doubled to €38 million in the first six months of the year.

Venture capital funding in Ireland fell 5 per cent in the first half of 2019, dipping to €430 million, a new survey from the Irish Venture Capital Association (IVCA) has found.

The survey noted signs of a recovery in the second quarter of the period, with funding up 90 per cent to €233 million, but that was coming off a low investment figure of €122 million in 2018, the IVCA said.

The Pulse survey, published in association with William Fry, found that software accounted for almost half of total funding over the six-month period, with top deals including Fenergo’s €66 million fundraise and Imeddis’s €25 million funding round.

Life sciences accounted for 25 per cent and fintech investments reached almost 10 per cent of the total for the first time. Future Finance was among the standout deals in the latter sector, raising €23 million during the period.

The number of companies raising funds in the first half of 2019 rose to 139 from 93 in the same period a year earlier.

There were other encouraging signs, with IVCA director-general Sarah-Jane Larkin noting seed funding to early-stage companies more than doubled to €38 million in the first six months of the year.

IVCA chairman Neil McGowan said he hoped the recovery in funding seen in the second quarter could continue, with the help of Government policy. He warned against being over-reliant on foreign direct investment.

“In the light of so many international economic uncertainties, it is vital to grow and encourage our indigenous base in an environment where we are probably over-reliant on foreign direct investment,” he said. “This dependence is reflected in the fact that multinational companies contributed 77 per cent to last year’s corporation tax take.”

More than 2,500 Irish small and medium-sized enterprises have raised €5 billion in venture capital and private equity since the credit crunch in 2008, Ms Larkin said.