Apple's iPhone showcase notable for what wasn't there

Lack of 5G futureproofing a potential a stumbling block for Apple 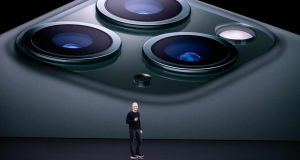 It’s getting harder to impress people but the tech giants are still giving it a good try. When Apple’s chief executive Tim Cook took to the stage in the Steve Jobs Theatre in Cupertino on Tuesday, he made a point of ditching the customary business updates to leap right into announcing new products.

There was a jam-packed agenda to get through: a new iPad, an updated Watch, and three new iPhones to unveil to the assembled audience and viewers of its live stream, not to mention details of pricing and availability for its new services, Apple Arcade and Apple TV+, with the latter designed to pile the pressure on Netflix as Apple undercut its rivals pricing considerably.

“Our mission at Apple has always been to design products that empower people and enrich people’s lives, to put technologies in your hands, and just see all the wonderful things that you’ll do with them,” Cook said.

The main announcement of the day was the iPhone. With the iPhone 11 and 11 Pro, Apple upgraded the cameras in the phones, updated the chip and threw a year of the new TV+ service in for good measure. Hardware may have the wow factor but, as Apple is demonstrating, services revenue is becoming more important to the business’s future.

In line with recent experience, several of the new phones’ features had already leaked. By the time Phil Schiller introduced the iPhone 11 Pro, which replace the current Xs and Xs Max, photos of the 11 Pro’s new triple camera had already appeared online.

The iPhone 11, the cheapest of the three models unveiled on the day, comes with a dual camera, with Apple adding an ultrawide camera to the existing wide-angle lens.

And there was movement on price too.

“Apple’s new phones were no surprise at all. Only tangible change is having an additional camera on their premium model,” said Park Sung-soon, an analyst at Seoul-based Cape Investment & Securities. “However, it is noticeable that Apple has made a price cut for the newest iPhone of about $50, which is a very rare move for the company. The move might be aiming to manage and reduce potential risks drawn by the US-China trade war.”

When it comes to smartphones these days, the emphasis is often on the cameras. Huawei began including a triple camera in its P20 Pro device last year, upgrading it further with the launch of the P30 Pro. Samsung introduced its S10 earlier in the year with an ultrawide camera lens.

No sooner had the buzz started about the iPhone announcements than the talk turned to what the announcements hadn’t covered. The most obvious one: 5G, which none of the new iPhones included.

Could that be a stumbling block for Apple? The tech giant is facing increased competition in the smartphone market, both from its rivals and its own devices. While Samsung, Huawei and Google are making more powerful phones with an increasing list of smart features, iPhone owners aren’t necessarily looking to shell out for the upgrade. People are holding on to their handsets for longer, waiting for a compelling reason to change over their devices.

The launch of 5G globally could be that reason, although the rollout of 5G is still in its infancy.

“The lack of support for 5G in the new iPhones is certainly going to be a talking point in the aftermath of the launch. However, the reality is that, despite all the hype, it is still early days for 5G, even in the UK market which is emerging as one of the leading markets globally,” said Ben Wood, analyst with CCS Insight.

“Most people getting a new iPhone will upgrading a phone that is three or four years old, so a new model will be a big update. And given people’s loyalty to iPhone, if they really want 5G they’ll probably just wait until Apple does support 5G.”

It will provide an opportunity for the company’s rivals though, Woods said. Samsung recently announced its latest Note handset, the Note 10, and included a 5G version; its S10 device unveiled earlier this year also came with a 5G version as part of the range. Huawei’s Mate X foldable phone also supports 5G, and there will be more to come. That leaves Apple the only holdout – for now.

“Don’t be surprised to see rivals, particularly Samsung, really dialling up their 5G story and positioning 5G devices as a ‘futureproof’ option if you are buying a phone you’ll own for three years or more,” Woods said. “I’m sure Apple’s rivals will be arguing that buying a premium-priced 4G smartphone right now would be like buying a TV a few years ago that was not HD-ready. However, Apple knows that the vast majority of its customers will probably be happy to wait.”

In Europe, it may not be as much of an issue, with operators only beginning the process. Where it could be a problem is in Asia, where there are plenty of cheaper handsets from rivals that already compete closely on features.

The lower price on the iPhone 11 – which will retail at €829 – may well have been an attempt to capture that market, but the handsets received a lukewarm welcome there, with consumers drawing attention to the lack of 5G and the features in comparison with local rivals such as Huawei.

Still, it may be next year before that impact is really felt. Analysts expect China’s smartphone market to rapidly ramp up 5G demand next year. Apple currently sits in the top five smartphone makers in the region, but analysts say it could be difficult for the company to maintain that position.

“It remains to be seen if iPhone 11 can offer technology innovations to offset some disadvantages in hardware, like lack of 5G support,” said Jia Mo, an analyst at research firm Canalys.

The iPhone 11 Pro is glass and aluminium, sticking largely to the same design the iPhone has had since the iPhone X. But there is one noticeable difference: the camera on the back has three lenses instead of two, and it’s arranged in a square instead of vertically stacked.

The back of the phone is milled from a single piece of glass, eliminating any potential compromising of the phone’s water resistance. It’s matt textured instead of smooth, and it feels like it would be less slippery to hold than the smoother phones Apple has been putting out of late. It also means fewer fingerprints to deal with.

There are two sizes: the 11 Pro with a 5.8-inch screen and the Max with a 6.5-inch display. That’s where the differences more or less end though, with the tech remaining the same in the larger and smaller device. You also get the same choice of colours – gold, space grey, silver and, a new option for Apple, midnight green. Current favourite is a toss-up between midnight green and silver.

The crucial difference between the iPhone 11 Pro and the Xs is the third camera Apple has included – the ultrawide lens that lets you zoom right out and capture more of the surrounding world in a single frame.

When you open the camera, you start at the standard wide-angle lens. In the past couple of iPhones, you could switch between 1x and 2x; the 11 Pro gives you a third option, zooming out to 0.5x.

It’s the difference between getting a photo in a tight spot and feeling like your shot has been cramped, or being able to take in all of a building instead of cutting the top off.

Another important feature for customers is the night mode. Samsung has made some improvements here, making it automatic. Once the light drops below a certain level, night mode kicks in. It looks impressive, with brighter photos with more natural colours and not a huge amount of noise. It doesn’t look over-processed either, which is key.

Then there’s smart HDR, which will identify the subjects in your photograph and light them in a more natural way.

Portrait mode has also got new lighting options, with a black-and-white keylighting mode that will give your photos a seriously professional look.

Other things to note: video is smooth, even when you are mobile and handheld, thanks to the optical image stabilisation, and QuickTake lets you start to shoot video even when you are in photo mode by just pressing and holding the shutter button.

The front-facing camera has also got an update. Not only has the TrueDepth camera been upgraded to make FaceID faster, but the 12 megapixel camera now gives you a wider viewing angle when you turn the display to landscape orientation.

And there are also slo-mo video selfies, which Apple has dubbed “slogies” and others are calling “slofies”. We’ll see how well that takes off.

Also one for later: Deep Fusion, which will take nine photographs, including four before you even press the shutter and one long exposure, and then use the power of the iPhone’s A13 Bionic chip to piece together the best photograph possible. It picks up the detail, perfects the textures and optimises for as little noise as possible. In general, it makes the photos look a lot better.

In the short time I had the phone, the performance seemed smooth. The A13 bionic chip is an upgrade from last year’s so you would expect it to perform as well as and better than the A12.

Apple says it’s also its most efficient chip, so it uses less power than its predecessors. That should mean a battery life bump – four hours extra for the 11 Pro and five for the 11 Pro Max. Obviously the real test will be when the phone is loaded up with apps we barely use but never delete.

There is one other benefit to buying an iPhone – regardless of whether it is the 11, the 11 Pro or the 11 Pro Max. Apple is throwing in a year’s worth of its streaming service for customers. Sure, it’s only €5 per month that you’re saving but better in your pocket than someone else’s. And if you sign up enough people for their free year, Apple is working on the assumption that some will keep paying for it.