Irish firms lagging behind European peers in adopting the cloud 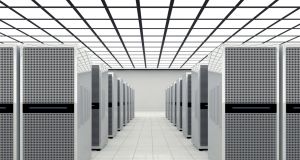 Data volumes are expected to continue to rise, with Irish firms estimating the next three years will see a surge of 72 per cent. Photograph: Getty Images

Irish companies are lagging behind their European peers in adopting the cloud, a new survey claims, as data volumes surge and more than a quarter admit they don’t have the infrastructure to deal with the rise.

The research conducted by data centre company Equinix found 64 per cent of Irish firms are planning to move more business functions to the cloud, compared with an average of 71 per cent in Europe, the Middle East and Africa.

The study took in more than 1,200 senior IT professionals in the EMEA region, including 100 in Ireland.

The average Irish enterprise spent €1.35 million on data storage, processing and handling in past 12 months.

Cloud services are becoming increasingly important to companies, with 60 per cent of those surveyed citing proximity to cloud service providers as an important factor in choosing data centres in local markets. That figure was 67 per cent in Ireland.

But there is still a wariness around the adoption of cloud services, with 70 per cent of firms in the EMEA region saying there were cybersecurity risks, and 45 per cent of companies said they were prioritising the improvement of their own security.

Data volumes are expected to continue to rise, with Irish firms estimating the next three years will see a surge of 72 per cent. However, 27 per cent of Irish firms said they didn’t have the correct infrastructure to deal with these increasing volumes.

“As Irish businesses become increasingly digitised, they are consuming and producing record amounts of data. We can see that enterprises are investing heavily in getting value out of this data and ensuring it works best for their business,” said Maurice Mortell, managing director for Ireland and emerging markets at Equinix.

“However, there is still a large proportion of companies that don’t have confidence in their digital infrastructure. In today’s world, digital transformation is non-negotiable – it is essential for survival and success.”

1 Provisional liquidator appointed to Dublin engineering firm
2 How can I view my dead brother’s will if I’m not the executor?
3 Kerry trading profit rises 12.1% in year of mega-deal miss
4 Bursting of Tesla bubble a case of ‘not if, but when’
5 Finance Ireland plans stock market flotation in May
Real news has value SUBSCRIBE