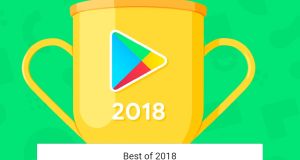 Google Play has released its Best of List for 2018 across all categories within its app store including: apps, games, movies, TV shows, books and audiobooks. This year they have also included a new category – fan favourites – voted by Play users from an existing shortlist.

Echoing general pop culture, the top five movies of the year were Deadpool 2, Jumanji: Welcome to the Jungle, Thor: Ragnarok, Avengers: Infinity War, and, coming in at number one, Black Panther. The top TV show was The Walking Dead although kiddies favourite PAW Patrol made it in at number five.

King of horror Stephen King dominated both the top ebook and audiobook category with The Outsider while Michelle Obama’s newly released memoir Becoming has already made it into the top five audiobooks of the year.

The best app of the year is Drops: Learn 31 New Languages while PlayerUnknown’s Battlegrounds got the top spot in games and fan favourite game. Meanwhile Play users also picked Avengers: Infinity War but chose YouTube TV as their favourite app.