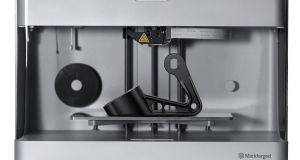 The move is part of the Boston-based company’s global expansion this year. The new roles will be mainly sales, marketing and business development.

Markforged was founded in 2013, and produces affordable machines that print high-strength materials such as carbon fibre and MIM metals. The company has embarked on an expansion programme since it announced an $82 million series D fundraising round in late March.

Markforged is currently on the hunt for permanent offices, but will be based at WeWork in Iveagh Court as it grows its operations. Four of the company’s US based staff will relocate to Dublin to assist in setting up the office for the first two years, with Stephen Barbuto, EMEA director of commercial sales, leading the office.

“We started looking at Europe about a year ago,” said Darcey Harrison, vice-president for sales, services and partnerships at Markforged. Dublin was in competition with a number of other locations to host the office, including the UK and the Netherlands. However, the city’s proximity to the US office, along with technical talent available in the region and its location in relation to the Europe, Middle East and Africa region proved a selling point for Markforged.

There could be further jobs down the line for the office too. “We are very open to increasing the size of the office,” said Ms Harrison, but added it was hard to project exact staff numbers at this stage. Europe is becoming an increasingly important market for Markforged, Ms Harrison said. “Today Europe represents a third of our global sales.”

The company is being supported by IDA Ireland. “The decision by Markforged to locate their European headquarters in Dublin again confirms Ireland’s reputation as the premier location for fast-growing, innovative companies to build and support their future international growth,” said IDA Ireland chief executive Martin Shanahan said.

The news was also welcomed by Minister for Business, Enterprise and Innovation Heather Humphreys. “We all know the strong potential of 3D printing and I warmly welcome their presence in Ireland and the creation of 100 highly skilled jobs,” she said.

1 ‘French people are pretty relaxed. They don’t pander to scaremongering or hysteria’
2 Guinness brings out a non-alcoholic version of the black stuff
3 Goldman Sachs in talks to take over Blanchardstown shopping centre
4 ‘Last-chance saloon’ Brexit talks will yield deal, Phil Hogan claims
5 How much will a Covid-19 vaccine cost?
Real news has value SUBSCRIBE