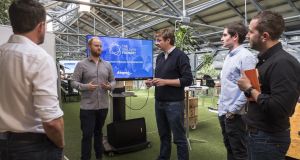 Evan Gary, founder of Laundrie, the online laundry app, in a workshop with the Unilever and Dogpatch Labs teams

The partnership with Unilever’s start-up collaboration platform Unilever Foundry, aims to provide a clear path for Irish tech companies to explore business ideas with the Dutch-British group, whose brands include Hellmann’s, Knorr, Marmite, Surf and Dove.

Unilever Ireland managing director Nick Johnson insisted the company was not interested in being a “tech tourist”. He said Unilever was committed to playing an important role in helping to develop start-ups working in areas such as adtech, marketing tech and sustainable living solutions.

“We want an access point to this innovation and in Ireland there’s great talent and ideas that we would like to tap into,” said Mr Johnson.

“This is very much an ongoing relationship as far as we are concerned. We are not tech tourists in this area. The foundry has been running for a few years and our aim is to build and cultivate strategic partnerships for the future by ensuring there’s a good level of experimentation with our brands,” he added.

While Irish companies working in areas such as fintech have tended to hog the headlines of late, there are a growing number of high-potential tech start-ups operating in the broader FMCG space, including the on-demand cleaning service app Laundrie, the shopping app Pointy and BuyMie, a same-day grocery delivery firm.

The FMCG sector is increasingly being disrupted by new technologies and Unilever, which is one of the biggest advertisers in the world with more than 400 brands that are used by over two billion people daily, is seeking to remain a market leader by collaborating with entrepreneurs on groundbreaking solutions.

Last year, Unilever shocked many when it bought online men’s razor merchant Dollar Shave Club for $1 billion. The group has made over 40 investments in recent years through its investment arm, Unilever Ventures.

Originally launched in London in 2014, the Unilever Foundry has branches in a number of countries including Singapore, the US, India, Brazil and China. It offers start-ups access to the group’s marketing expertise, global scale and in some instances, funding.

Dogpatch, which is located in the CHQ-building in Dublin, is currently home to more than 45 companies. The hub provides a space for start-ups to grow and alumni include many of Ireland’s fastest-growing tech firms such as Intercom and Boxever.

Its managing director, Patrick Walsh, said the partnership with Unilever was “a meeting of minds” that would serve to make the hub a more interesting place.

“The stars aligned with this because we had been feeling that here we were working in a retail space where there are 1000s of people walking through every day but with which we have never really done anything to turn this to our advantage. At the same time, Unilever had been saying it was seeing a lot of interesting start-ups popping up in Ireland and was interested in doing more to support them,” said Mr Walsh.

He said Dogpatch would be involved in identifying relevant companies and will be hosting a number of events – including workshops and hackathons – on an ongoing basis.

“There are a growing number of tech companies in this space but there hasn’t really been an incubator or accelerator until now that can help them get out beyond Ireland to talk to the big brands and supermarkets. This new partnership will help open multiple channels to lots of Irish start-ups,” said Mr Walsh.