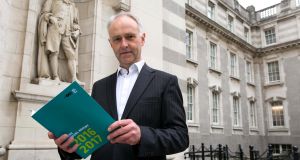 NDRC chief executive Ben Hurley: “Diversity is important and nearly a third of our ventures have females on the founding teams.” Photograph: SON Photographic

NDRC, the Dublin-based but nationwide early stage tech investor, realised investor returns of €460,000 in 2016, a year in which the number of companies it backed rose by almost 25 per cent.

The centre has supported 226 firms since it was founded with companies associated with NDRC raising €152 million in cumulative follow-up investment last year, up by 22 per cent compared to 2015.

“The follow-on investment figure is ongoing proof that the quality of the ventures coming out of NDRC is strong with companies continuing to attract more money and trading internationally,” chief executive Ben Hurley told The Irish Times.

NDRC’s annual report, which was published on Thursday, shows it supported 32 digital start-ups in 2016 versus 26 in the prior year. Competition remained strong with 440 applications to its acceleration and investment programmes.

The centre, formerly the National Digital Research Centre, was established in 2007 by a consortium of Irish third-level institutions. Alumni includes travel tech firm Boxever, which raised $12 million (€10.4 million) last year and Soundwave, which was acquired by Spotify for an undisclosed sum in January 2016.

The centre invests primarily using an accelerator model through its Launchpad, Catalyser and VentureLab investment programmes which provide modest amounts of capital and high amounts of hands-on support to early stage companies.

NDRC-backed companies NewsWhip, Bizimply, Nuritas and Silvercloud Health all secured Series A investment last year and collectively, NDRC-backed firms have a combined market value of more than €427 million, up 30 per cent, or €101 million, versus 2015.

Companies backed by the fund continue to do well in terms of funding with Plynk, a fintech firm that took part in NDRC’s Launchpad programme in 2015, last month securing €25 million in a Series A fund led by private investment trust Swiss Privee.

In addition to its usual activity, the organisation last year ran pre-acceleration programmes to stimulate innovation in fintech, healthtech and insuretech last year as well as a dedicated female founders initiative.

“Diversity is important and nearly a third of our ventures have females on the founding teams,” said Mr Hurley.

By the end of December 2016, NDRC portfolio companies had created 680 direct, high-value jobs in Ireland and 127 overseas roles.

In 2016, NDRC, which is based in the Digital Hub in Dublin’s Liberties area, secured the tender to run two regional accelerators on behalf of Enterprise Ireland.

Mr Hurley said the Irish tech ecosystem was in relatively good shape but added that the economic opportunity posed by digital is still at an early stage.

“We need to continue to actively support digital entrepreneurialism. We haven’t always been the best at commercialising our inventiveness and innovation and we need to build more of a track record in this area,” he said.