Subreddits host loving posts and hilarious comments on dogs, cats and other creatures 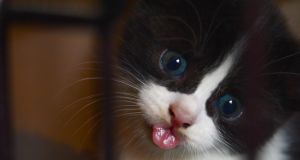 Cat-lovers post about their pets’ antics on Blep, Blep and Blup.

For all the media coverage afforded to Instagram and Twitter, Reddit ranks above both in terms of most visited website globally, coming in at number 7. It is one of those places on the web that divides opinion; on the one hand there are fantastically informative subreddits or forums like AMA (Ask Me Anything) where experts, celebrities and regular folks with interesting lives have a platform and an audience. On the other, some subreddits are toxic and should be avoided. The_Donald, for example, is as intolerant, racist and misogynistic as the man himself.

But the best thing about Reddit is that some of its haunts are a throwback to a younger, more innocent internet of message boards where strangers chat amicably. The subreddits of Blop, Blep and Blup are home to loving posts – and hilarious comments – on dogs, cats and other creatures respectively. The funny names refer to the act of an animal’s tongue hanging out. These communities have huge followings and are strict in enforcing rules that ban trolling, fake bleps (why would you?), and other actions that can lead to non-blepping harmony. A heart-warming side of the web.

1 ‘No demand... because there are no people’ at well-known Dublin pub
2 Revised help-to-buy scheme opens for applications
3 Transferring the family farm without a tax headache
4 Nearly 30,000 could lose pandemic payment if they do not confirm eligibility
5 Stripe lures Dhivya Suryadevara from General Motors to be CFO
Real news has value SUBSCRIBE