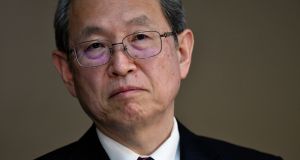 Toshiba president Satoshi Tsunakawa: The firm said its auditing committee had confirmed that certain senior managers at its US nuclear unit Westinghouse had exerted “inappropriate pressure” in the accounting for an acquisition of a power plant construction company. Photograph: Franck Robichon/EPA

Japan’s Toshiba failed to submit audited third-quarter earnings for a second time on Tuesday after the company was given a one month extension as its expands an inquiry into problems at its US nuclear unit Westinghouse.

With its financial woes only deepening, Toshiba said it would speed up looking at whether to sell a majority of Westinghouse even as it sought to reassure investors it could have a future without the unit or its prized memory chip business which has been put up for sale.

“We need further reforms to overcome the difficulties resulting from the accounting scandal and losses in the nuclear business,” said president Satoshi Tsunakawa in a press briefing Tuesday afternoon. “That’s something myself, the management and employees have to take responsibility for and work toward bringing the company back on the path of growth.”

Toshiba said on Tuesday that it is planning to sell about 160 billion yen (€1.3 billion) of assets in the 2016 fiscal year. It also plans to cut the number of board members and have a majority of directors from outside the company.

The conglomerate said its auditing committee had confirmed that certain Westinghouse senior managers had exerted “inappropriate pressure” in the accounting for an acquisition of a US nuclear power plant construction company in its third-quarter earnings.

It now needs to check if pressure was exerted in preceding quarters as it would also be filing nine-month results. Toshiba will also expand the inquiry’s scope to see if there were “other inappropriate pressures”, it said in a statement without elaborating on what they might be.

Westinghouse has become the epicentre of Toshiba’s latest crisis, after buying a US nuclear power plant construction company from Chicago Bridge & Iron in 2015.

Two US projects in Georgia and South Carolina handled by the acquired firm have been plagued by cost overruns and Toshiba has already flagged a $6.3 billion (€5.9 billion) writedown.

Liabilities attached to Westinghouse mean it is unlikely to be an easy asset to sell, despite attractive technology. South Korea’s Kepco is seen as the only potential buyer, as it expands in nuclear after a successful deal in the United Arab Emirates.

Kepco said on Tuesday it would consider an approach by Toshiba.

“We will review the overall project and weigh how beneficial this project would be to us,” a spokesman said.

Toshiba, for whom the latest scandal is its second in two years, said it would also introduce fresh measures to overhaul its governance, including improving board-level oversight, internal controls, risk management and headquarters’ grip on the activities of its affiliates.

Those forecasts helped its stock recover from sharp losses to end 0.5 per cent higher on the day.

The new extension to April 11th follows its first postponement of audited earnings a month ago. If it fails to meet that deadline and does not gain another extension it would have until April 21st to submit the earnings or be delisted.

A source with direct knowledge of the matter said a one-month extension should be enough to work out differences with auditors.

“I understand auditors’ skittishness but at the same time I don’t think they want to be the reason for Toshiba’s failure by keeping refusing to sign off,” said the source, who was not authorised to discuss the matter publicly.

Toshiba is also due to submit a report to the Tokyo Stock Exchange this week on its internal controls in the wake of its latest financial woes as well the 2015 accounting scandal. That could eventually also lead to a delisting if the bourse finds Toshiba’s efforts unsatisfactory.