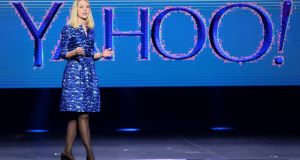 Yahoo! chief executive Marissa Mayer: “For me personally, I’m planning to stay. I love Yahoo, and I believe in all of you. It’s important to me to see Yahoo into its next chapter.” Photograph: Ethan Miller/Getty

In a filing yesterday, Yahoo said that Ms Mayer would receive the “golden parachute” money if her employment was terminated “without cause” following the $4.5 billion acquisition by Verizon planned to close in the second quarter.

Verizon has not said whether it expects Ms Mayer to continue to lead Yahoo as a unit inside the company, as Tim Armstrong, AOL chief executive, did after Verizon acquired AOL.

Ms Mayer, a former Google executive who promised a turnaround when she took over in 2012, said last year that she planned to stay at Yahoo.

“For me personally, I’m planning to stay. I love Yahoo, and I believe in all of you. It’s important to me to see Yahoo into its next chapter,” she wrote to employees on her Tumblr blog just after the Verizon deal was announced.

In filings last year while Yahoo was still exploring a deal with potential buyers, the company said Ms Mayer could take home up to $55 million after any deal, partly because the value of the stock had soared since she took over. Excluding the share price rise – which reflects investors buying Yahoo for its stake in Chinese ecommerce group Alibaba – Ms Mayer was due to receive $14 million.

Yahoo’s sale to Verizon has been delayed after Yahoo discovered two huge data breaches. Verizon negotiated a $350 million discount on the deal, becoming one of the first big US companies to revise deal terms because of a cyber attack.

Shortly after the new deal terms were announced, Yahoo admitted senior executives and relevant legal staff knew of the hack by a state-sponsored attacker in 2014 but did not “properly comprehend or investigate” the matter. – Copyright The Financial Times Limited 2017

1 The lockdown was overkill but justifiable in an information vacuum
2 Aer Lingus wants quarantine period axed to resume flights in July
3 Should my mam wait for house prices to drop before buying?
4 Brother is dragging his heels as executor of uncle’s will - is there anything I can do?
5 Apple tax case: Four individual lawyers paid over €500,000 each
Real news has value SUBSCRIBE