This week we’re talking about . . . the demise of Pebble

Despite selling two million watches, time has run out for the wearable tech firm 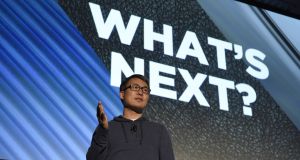 Pebble, the one-time darling of the wearable tech market and the crowdfunding scene, has called time on its operation.

Despite selling more than 2 million of its watches and notching up one of the most successful crowdfunding campaigns on Kickstarter, it seems it just wasn’t enough. There will be no more Pebbles made or sold through Pebble’s site. It’s the end of an era, albeit a relatively short one.

Wearable tech firm Fitbit announced earlier this week that it had bought Pebble – or some of its key assets at least – for a rumoured price tag of up to $40 million (€66 million). That’s a bargain when you consider it had previously been courted with offers of more than $700 million, and only a few months ago, Intel offered $70 million for the company. Chief executive and founder Eric Migicovsky turned them all down.

For $40 million, Fitbit is getting Pebble’s software, intellectual property and taking on Pebble engineers. The one thing it’s not buying? The hardware.

Pebble, on the other hand, will get its debts just about covered, if the whispers are true.

In a blog post, Migicovsky delivered the bad news. “Pebble is no longer able to operate as an independent entity. We have made the tough decision to shut down the company and no longer manufacture Pebble devices,” he wrote.

“It’s a bittersweet day, but I want to extend my biggest thanks to the Pebble community. Personally, one of the best feelings ever is spotting you on the train, running through an airport or finishing a bike ride and checking your Pebble. If you catch me staring at your wrist (I’ll be the tall guy wearing a Pebble T-shirt), stop me and say, ‘Hi’. If you’re wearing your Pebble, a drink is on me!”

I own a Pebble. What does this mean for me?

Nothing in the immediate future. But over time, you might find that your Pebble does less than you hope. Warranty support for Pebble products is also finished, so if anything goes wrong you’ll have to depend on the company’s support page and forum.

There is no real good news here. But wearables aren’t designed to last more than a couple of years anyway thanks to software upgrades and hardware advances, so you were probably always going to end up buying a new one in a couple of years.

What about the Time 2 and the other new products Pebble was planning?

The company said it would not be making any more Pebbles. That means no Time 2 or Core, and if you backed them on Kickstarter already but haven’t got your product already, you’ll be getting your money back shortly.

The company is also honouring refunds for watches returned before December 7th. If you bought one just before the deal was announced, it’s up to the individual shops to decide if you can get your money back or swap it for a smartwatch that isn’t facing extinction.

What is Fitbit going to do with Pebble’s assets?

The company hasn’t given much away, but it is pushing into the health market more and more, so the Pebble acquisition may well be a way to accelerate this.

What does this mean for the rest of the wearable market?

Who knows? It’s not a good endorsement, but it’s by no means the first one to throw in the towel. Wearables haven’t managed to hit the mainstream in the way that people hoped they would, probably leading to Pebble’s demise.

In the meantime, competition in the market has ramped up a lot, with Apple throwing its hat in the ring along with Samsung, LG, Huawei and a multitude of others. Motorola isn’t planning on making any more of its Moto 360 watches for the foreseeable future.

It doesn’t mean wearable tech is dead, but it’s certainly a sign that consumers aren’t rushing to embrace it in quite the amount that some companies hoped.