Ever wished you could watch ‘Stranger Things’ on a plane? Now you can 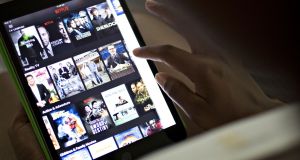 One of the most frustrating things about Netflix – apart from the occasional disappearing series is the fact that you can’t watch any of the content offline. Or at least, you couldn’t until now. This week the company announced it was enabling downloads for offline viewing, which means your plane, train or car journey just got a little bit less boring.

The move is especially useful in areas where internet connections, while not completely absent – may not be the most robust, leaving you looking at a frozen screen more frequently than you’d like.

The best news of the entire story? It’s available to all customers, including in Ireland, right now. Ready to commence binge-watching?

When did Netflix start doing this? And why?

As of Wednesday, the company started allowing people access to the downloads feature. But the rumours of its arrival have been flying for months.

Users have been after this for a long time. On the company’s blog, Netflix’s Eddy Wu said: “While many members enjoy watching Netflix at home, we’ve often heard they also want to continue their Stranger Things binge while on airplanes and other places where internet is expensive or limited.”

That makes sense. But it’s likely to be pressure from competitors too. Amazon Prime, for example, allows its customers in some territories to download some video content for offline viewing, and others will probably follow suit.

It’s not so much a catch as a caveat. Not all content is available right now, although Netflix said it was working on licensing other content. As you might expect, Netflix originals – Narcos, House of Cards, Stranger Things – are all available for offline viewing. There’s a decent range of stuff though, with a mix of kids’ programmes, entertainment and documentary spread across films and TV series. Chances are you’ll find something you’re interested in.

You’ll have to download the updated version of the Netflix app for iOS or Android. Once you do that, you’ll see a new section called “Available for download”. Each programme available for download has a small icon beside every episode; tap that and you can download it directly to your tablet or smartphone.

Your downloads are stored within the app, in a section called “My downloads”.

There are multiple users on my account. What happens there?

Similar to the personalised recommendations on Netflix, your downloads are associated with your user name, and all authorised users can watch offline. So if you’re a fan of Narcos but another user is more of a Peppa Pig viewer, your offline programmes stay separate.

Anything else I should know?

When you start downloading, there are a couple of default settings that are enabled. First, that you can only download over wifi, and second that the quality is set to “standard”. Both of these can be changed, so if you really feel like making in dent in your data allowance, who is Netflix to stop you?

The quality setting is a bit less straightforward. You can choose between “standard”, which downloads faster and uses less space, and “higher”, which will take up more space on your device. The less clear bit is exactly what resolution both of those settings are.

How will this affect the TV providers?

Honestly? Probably not a whole lot. It’s not known exactly how many people subscribe to Netflix in Ireland (Laura Slattery reckons about 300,000), but offline viewing alone probably won’t be enough to push them into abandoning their TV. The chief complaint about streaming services is the breadth – or lack – of content. Having offline downloads doesn’t solve that problem, it just makes it easier to watch the content we’ve had all along.

As for terrestrial linear TV, on-demand viewing such as that offered by Sky, Virgin Media and various catch-up services have likely done the damage already.

What about people watching on desktops or laptops?

No sign of any offline feature there, I’m afraid.