Revenue at VR Education up 15% to €716,000 following success of virtual reality titles 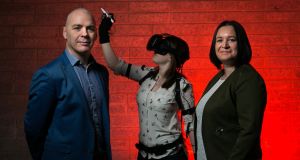 Virtual reality technology company VR Education said revenue rose 15 per cent in 2018 as the company posted its first results since listing on the stock exchange.

The company, which raised £6 million when it held its IPO in March 2018, said its pretax loss of €4.9 million for 2018 was in line with management expectations. The figure included a non-cash fair value loss on derivative financial liabilities of €2.6 million, VR Education said.

David Whelan, chief executive of VR Education, said the group had made substantial operational progress since its admission to the stock market, and this was in line with its strategy outlined at the time of the IPO.

Davy said revenue figures were above its expectations, and the results pointed towards a positive year ahead. “We believe 2019 is building to be a strong year with the commercial release of Engage and a broadening base of retail experiences,” analysts wrote in a note.

The company also completed the 1943 Berlin Blitz experience, a joint project with the BBC, during 2018 and was nominated for a VR award at the Venice Film Festival in September 2018.

The company has also made strategic hires during the year, strengthening its management team with the appointment of a new chief technology officer, and Pixar Animation Studios’ Loren Carpenter coming on board as an adviser.

The company will publish its next VR experience, Raid on the Ruhr, in the first half of 2019.

“The successful IPO and fundraise has been followed by a series of significant product launches; and so, a year on from the listing, the group has both launched its Engage platform in commercial form and has broadened its retail experiences beyond Apollo 11 VR into Titanic VR and 1943 Berlin Blitz,” said Richard Cooper, chairman of VR Education. “The group is therefore well placed to capitalise on these in 2019 and beyond.”