If more of your life is spent on the road than in the office, then these are tools, from cloud storage to tablets and tracking devices, to make your life that bit easier 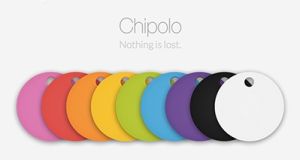 Chipolo enables you to find your belongings by sound, see them on a map or use community search to recover lost items.

If there is one thing that technology has done, it has made it easier to work wherever, and whenever, you want. The days of being chained to your desk from 9-5 are gone, and while some may lament the blurring of the lines between

work and leisure time, there are other payoffs: fl exible working arrangements, a better work/ life balance and the ability to access information from wherever you are, as long as you have an internet connection.

One of the great levellers of the playing fi eld has been the popularity of the smartphone and the increase in availability of high-speed mobile internet connections. But sometimes you need extra screen space.

Tablets, while not quite the laptop killer they may have originally been billed as, are becoming increasingly useful to business users. The arrival of the iPad Pro – both the 12.7-inch version and 9.7-inch one that followed shortly after – heralded that move.

Samsung has also unveiled its own line of Pro devices, with the Tab Pro S for those who want to stick with Windows.

Regardless of whether you stick with a laptop, shift to a tablet or rely on your smartphone, there are plenty of apps and software out there that can help make your working life a little easier. Having a note-taking app can help keep your information in one place; having it uploaded to the cloud, available across all your devices, is useful.

Micrsoft’s OneNote works across mobile devices and desktops, from iOS to Windows; Evernote allows you to clip things from the web and drop them into your account in addition to giving you space to store your notes and fi les; while GoodNotes turns your tablet.

If you are carrying equipment on a regular basis, having a way to keep track of it and secure it is helpful. Kensington locks are one of the best ways to secure equipment, such as your laptop, if it is going to be in a public place or if you are travelling.

But what about leaving a device behind on a plane or in a taxi? In recent years, a number of companies have devised Bluetooth tags that can be used to keep track of everything from your wallet and keys to your laptop and tablet by connecting them to your smartphone or tablet. Tile is one of the better-known options, offering a slim tag that can be attached to most devices. Your item’s location is tracked by pairing it with your phone, and you can “ring” the tag to fi nd it should you misplace it.

Its last known location is shown on a map, and if it is out of Bluetooth range, you can enlist the Tile community to help fi nd it by marking it as “lost”. Another option is Chipolo, which has a Classic and a Plus option.

The Classic has a non-replaceable battery; the Plus does not. Like Tile, when the Plus tracker runs out of battery, a new one can be purchased at a discount.

Later this year, Chipolo will be selling its Chipolo stickers, aproximately the size of a paper clip, which can be attached to everything from your sunglasses

to smaller tech items and tracked in a similar way to its Classic and Plus tags.

1 Karlin Lillington: How I managed to cut my mobile phone bill by at least half
2 Admission of mistake in Oxford vaccine dose raises doubts over reliability
3 State may face €1bn in compensation in Covid-19 case, Press Up claims
4 Smarter ways to heat your home: Eight of the best modern systems
5 Irish Life fund pays €49m for 94 Dalkey apartments
Real news has value SUBSCRIBE