The race is on: Can Dublin win post-Brexit business?

It lost Lloyd’s to Brussels and AIG to Luxembourg, but Dublin is still in the frame for financial services companies looking to stay in the EU 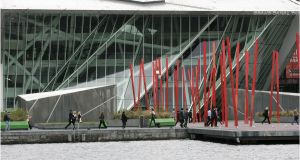 As Dublin vies with Luxembourg, Frankfurt and Paris to woobankers, insurers and fund managers from London as the UK prepares to exit the European Union, Ireland is widening its pitch to “Brexit Plus”. (Photograph: Dara Mac Dónaill / THE IRISH TIMES)

As Dublin vies with Luxembourg, Frankfurt and Paris to woo bankers, insurers and fund managers from London as the UK prepares to exit the European Union, Ireland is widening its pitch to “Brexit Plus”.

Financial firms in the UK spent the months following the Brexit referendum fi guring out what parts of their business they needed to relocate to retain access to EU markets.

However, the conversation has evolved in recent months, according to Kieran Donoghue, head of international fi nancial services at IDA Ireland. “A number of firms have said: ‘We should pause, during this seismic event for the industry, and think longterm of our European business’,” says Donoghue.

In internal conversations that look at broader issues such as cost income ratios and competitiveness, after-tax returns and cultural, language and legal fits, “Ireland ranks quite highly,” he says.

The emergence of a wider pitch comes as Luxembourg appears to have snapped up early wins in the insurance space at the expense of Dublin – with US giant AIG, Lloyd's of London insurer Hiscox and property coverage company FM Global opting to set up EU hubs in the Grand Duchy.

Meanwhile, Frankfurt, home of the European Central Bank and its banking supervision arm, is on track to lure Standard Chartered, Japanese investment bank Daiwa and Goldman Sachs, helped by the sweetener that Germany may relax labour laws to make it easier to hire and fire senior bankers.

“While it can be tempting to characterise relocations as a ‘race’ to different European cities, the reality is that Ireland doesn’t have to come first to win in this scenario,” says Cormac Kelly, executive director of Europe, Middle East, India and Africa financial services at EY in Ireland.

“It’s not essential for Ireland to lead this process, so much as it’s important for us to participate actively within it and be seen as a location of robust financial institutions.”

Brian Daly, partner and head of Brexit group at KPMG in Ireland, adds that Ireland’s competitiveness can be enhanced by improving the quality of the regulatory environment, while alleviating the personal tax burden would make Ireland more attractive.

“I would also add that in the medium term, increasing the density of development allowed in Dublin will assist in allowing for improvements in our public transport system, which together with our flight connectivity is vital to our relative international competitiveness,” he says.

IDA Ireland has fi elded inquiries and worked with between 80 and 100 companies, mainly in financial services looking to move operations out of London since the UK referendum last June, according to Donoghue.

“A certain number of firms have said they’ve chosenDublin, but they can’t announce yet,” he says. He says that many companies may make public their intentions in the coming months, as UK-based financial firms must inform the Bank of England of their contingency plans for Brexit by July 14th.

The inward investment agency’s “Brexit Plus” angle has resonated particularly with fi rms keen to take a phased approach to reconfiguring their European operations, he says. It also gives Dublin an opportunity to address current shortcomings in housing supply, schools offering an international curriculum and offi ce space.

“When we started suggesting to groups to phase the process and scale up over time, they responded positively,” says Donoghue.

“Their working assumption is that in Ireland, supply responds to demand.”

For Michael Costello, managing partner at BDO, Brexit presents significant opportunities to expand this. “One of Ireland’s key benefi ts for global financial institutions is the ability for regulated entities in Ireland to benefi t from EU passporting opportunities. In addition, Ireland can offer continued regulatory access to the EU single market from a common law jurisdiction, a competitive corporation tax regime, a highly skilled workforce and strong incentives for research and development,” he says.

“Dublin is a hub for certain types of financial services and we would see it competing most effectively in the areas where the city offers a critical mass of experienced people,” adds Philip O’Sullivan, an economist with Investec in Dublin. “Companies that look to move operations out of London are likely to have a natural bias to bulk up existing operations with the EU27 and if they are not already in Dublin, then this is a disadvantage for the city.”

JP Morgan, the largest bank in the US, is currently advancing plans to shift hundreds of jobs to Dublin, Frankfurt and Luxembourg as it prepares for Brexit. It is understood that Frankfurt is set to become the bank’s EU hub for trading of market securities, while Dublin and Luxembourg will be used mainly for back and middle-office functions.

However, JP Morgan – which signed a deal in May to buy a building under construction in Dublin’s south docklands capable of holding double the group’s 500-strong workforce – is also expanding its funds administration business in Ireland, which is not related to any Brexit activities.

Elsewhere, Scottish investment firm Standard Life, which has been in Ireland since 1834 and currently employs 300 people in Dublin, has signalled that the city will become its new EU base; banking group Barclays plans to more than double its 100-strong Dublin headcount to establish a European hub; and Bank of America Merrill Lynch has said it views the Irish capital as its default EU centre, given it has a banking licence here and employs more than 600 people across two locations.

Meanwhile, the Government is actively competing with places like Luxembourg, Frankfurt and Paris to become the new host of the European Banking Authority, which must move from London. Its future location may be an important factor for some financial firms weighing their post- Brexit operations.

Hopes of a Brexit “dividend” for Dublin from fi nancial services – even as Ireland overall economically is most exposed to the fallout from the UK quitting the EU – prompted a € 5-€ 10-per-square-foot “Brexit premium” to be added to quoted rents in the capital last autumn, according to Killian O’Higgins, managing director of WK Nowlan Real Estate Advisors. There are about 400,000 square metres of office space currently under construction in Dublin, with about half the new space pre-let or reserved for tenants, says O’Higgins.

Some of the exuberance about the Brexit boost for the property may be premature.

“In my view, there are not going to be many JPMorgan-type expansions in Dublin as a result of Brexit,” he says. “Superbig requirements are going to be few and far between. It’ll be smaller chunks of space that will be taken up by firms. And besides, companies can generally squeeze 20 per cent more workers into an offi ce space if they’re expanding.”