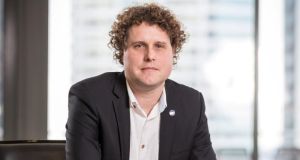 Peter Beck, chief executive RocketLab: “The biggest thing to be done in space has yet to be thought of”

The man behind one of the world’s first rocket launches from a private site has called on Irish spacetech firms to focus on small satellites if they want to get ahead.

Peter Beck, chief executive and founder of Rocket Lab, said money is no longer an obstacle for companies who want to build their own satellites.

Rocket Lab, whose mission it to remove barriers to commercial space by providing frequent-launch opportunities, last month successfully launched a low-cost battery-powered 3-D printed rocket called Electron into orbit from New Zealand’s remote Mahia Peninsula. The maiden flight was one of three tests the company is undertaking this year.

At full production Rocket Lab expects to launch more than 50 times a year, and is regulated to launch up to 120 times per annum. In comparison, there were 22 launches last year from the US, and 82 internationally. Starting price for flights start at about $5 million (€4.46m), with already-signed customers including Nasa, Spire, Planet, Moon Express and Spaceflight.

Rocket Lab was established by Mr Beck in his native New Zealand in 2006. The company, which is headquartered in California, is now valued at $1.42 billion (€1.27bn) following a recent Silicon Valley funding round.

Mr Beck, who was speaking to The Irish Times from the EY World Entrepreneur of the Year awards in Monaco last weekend where he was a finalist, said commercial companies can now build their own satellites for as little as $50,000 (€44,600).

“Building and launching satellites doesn’t require the huge investment it did in the past, and so the opportunity to use space as a domain like we use land, sea and air is completely opening up,” he said.

“The biggest thing to be done in space has yet to be thought of. Space is like America in the 1800s. There the odd rocket going up, but we’re trying to change things to make is an accessible domain.”

The rocket scientist said space was very much a commercial endeavour these days. “It used to be that governments were behind complicated intensive technologies such as space flight because there wasn’t expected to be a return on investment, but now and ROI [return on investment] is possible ad commercial entities are flooding into space.”

While it might be easy for those who follow in its wake, for Rocket Lab itself the journey into space has been anything but simple. The company had to persuade the US Federal Aviation Administration to give it the go-head for its test launch and to encourage the New Zealand government to create new legislation and set up a space agency.

Mr Beck said 50 per cent of the cost of the test programme had been on actually preparing Electron for its maiden flight, with the other half spent on regulatory and infrastructure costs.

The Mahia Peninsula was chosen as the launch site on geographical grounds as most of the world’s skies are overcrowded.

Advising Irish spacetech firms to take advantage of space, Mr Beck said there was a revolution in terms of satellites in particular.

The kind of things that used to be done with satellites the size of cars are now achieved with ones the size of microwaves. The whole idea of Moore’s law and technology shrinking applies to satellites, and its by far and away the biggest area of growth, he said.

“The whole space industry has been turned on its head, and there are so many opportunities for entrepreneurs.”

The number of Irish companies working in the space sector is expected to grow from 50 to over 80 by 2020, generating revenues that are predicted to grow from €76 million in 2015 to more than €150 million by 2020, according to Enterprise Ireland figures.