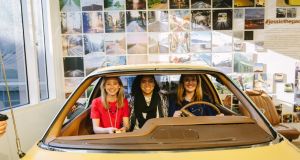 Dublin-based start-up GirlCrew, which has more than 100,000 members across 46 cities worldwide, is marking the release of its new mobile app with the opening of a pop-up store in Dublin’s Temple Bar.

Co-founded by Elva Carri, Pamela Newenham and Áine Mulloy, GirlCrew is a platform for women to expand their social circle, make new friends and share advice and tips.

“Real friendships happen in person. This is why we decided to open a temporary pop-up venue, providing a physical space for people to meet, hang-out and eat,” said Ms Newenham.

“It ties in well with the app, which is available to download from the Google PlayStore and Apple App Store as that provides a space for women to make new friends, share advice and chat online, while the pop-up store will give them a place to meet in person.”

The Enterprise Ireland-backed company was recently chosen out of more than 220 companies to represent the EU at the South by Southwest (SXSW) festival in Austin Texas.

In addition, GirlCrew, which started as a Facebook group, was last year included in a film honouring success stories on the social network platform with the co-founders being flown out to meet Mark Zuckerberg and Sheryl Sandberg.

The social network, in partnership with Microsoft, will host GirlCrew Pro in the pop-up venue on Thursday. The events aims to help women get ahead in their careers.

“The idea behind GirlCrew of a global network of women engaging, sharing ideas and learning from each other is a simple but effective one. I’m sure I speak for all GirlCrew members when I say I’m excited to see what’s coming next,” said Ms Hallahan.