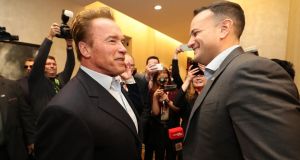 Trump that: Taoiseach Leo Varadkar meets Arnold Schwarzenegger in Austin, Texas, while in the city for the South by Southwest festival as part of his visit to the United States. Photograph: Niall Carson/PA Wire

Appearances from Democratic senator Bernie Sanders and Taoiseach Leo Varadkar are the only major political events on the schedule as SXSW programmers decide to go back to what they know best: tech, design and innovation.

The atmosphere at SXSW 2018 characterises that of the entire country right now: politically war-weary. Like the arrival of a carnival to smalltown America in days gone by, the crowd seem to be grateful for the many distractions offered by SXSW Interactive 2018 from the current political climate, which is clearly taking its toll on the national psyche.

After last year’s overtly partisan SXSW Interactive – with its “Tech under Trump” theme permeating much of the programme – curators of the 2018 schedule went for a far more balanced schedule of events.

Attendees at the annual music, film, tech, art and business festival, held in downtown Austin every March, breathed a collective sigh of relief at the chance of a respite from any more talk about Trump. This year’s programme offers a diverse mix of talks, panels, workshops and special guest appearances covering the entire gamut of human distractions, and 2018 might also signal the return of SXSW Interactive – traditionally the tech and innovation arm of the two-week event – to what it’s known for, and damn good at, that is, showcasing tech and innovation, often in ways that bypass political, societal and even legal norms.

Coding’s potential is impacting every discipline, from art history to zoology, and is often posited as the most valuable skillset one can have in the 21st century. Never before have individuals been so empowered by DIY digital tools to help change the world without even having to leave their desks. Unsurprisingly, coding infiltrates the SXSW Interactive programme too.

TechFugees, a non-profit which co-ordinates the international tech community’s response to refugee crises while also empowering the displaced with technology, was one of the first innovative new organisations to be showcased at SXSW. Chief operating officer Josephine Goube opened the event on Friday with a talk entitled “Lets tech the borders down”.

Senior White House tech adviser Alvin Salehi talked about “Sharing America’s code”. Through Code.gov, citizens can find new ways to give back to their country through coding, explained Salehi. Everyone from the NSA, the Department of Defense and the Office of the United States have ongoing projects to help improve government efficiency, defence projects and space programmes, which involve the coding skills of regular Americans volunteering their time and skills.

Various leaders from Orlando-based LGBTQ advocacy groups have also come to Austin to discuss the the important role social networking has played for the city’s LGBTQ community since the fatal shooting of 49 people at Pulse nightclub in Florida in 2016.

Through the power of social media, 30 distinct groups representing the transgender community, LGBTQ Muslims, Latin X and so on – who had heretofore little or no contact with each other – have begun co-operating in myriad ways making them stronger together. And all it took was the setting up of a group Facebook page.

Aside from discussion around how technology can improve our world, the programme is filled with tempting offerings for the design-, fashion- and food-oriented, not to mention a broad mix of delights for the entrepreneur, no matter how small or large.

As always, Enterprise Ireland and IDA Ireland have brought over a number of promising Irish start-ups to showcase Ireland’s commercial talent.

Setting out your country’s stall

But it’s not just a showcase for fledgling tech start-ups with new products or services that “will change the world”. Each year, entire countries use the event to showcase their potential and attraction as the next place to relocate to or invest in. But, inevitably, there are always some nations that decide to put more effort into it than others.

These days, every city or country claims to be the world’s next tech hub

Last year, it was the UK’s turn to splash out on the bunting and free booze in a desperate attempt to convince the world that Great Britain was still open for business post-Brexit.

This year it appears our not-so-near Nordic neighbours are pulling out all the stops. The Scandinavian region as a whole has decided to take a united front rather than attempting to stand out as individual countries. Scandinavia is putting on quite the spectacle in the hope it might attract new business and investment into the region, which already boasts some of the highest standards of living anywhere on the planet.

These days, every city or country claims to be the world’s next tech hub. Haakon, Crown Prince of Norway, is here promoting his country as the latest international centre the tech sector needs to focus on.

Politics on the fringe

According to SXSW Interactive director Hugh Forrest, politics impacts all other aspects of life, so it’s impossible to exclude it entirely from the programme. Still, his team have kept the polemic to a minimum. Leo Varadkar was invited and spoke to local broadcast pundit Evan Smith in the Austin Convention Centre on Sunday. He was the only world leader to attend SXSW 2018, albeit briefly, as he makes his way to the White House later this week.

Varadkar is, of course, going to meet the man everyone here is trying to forget about for a few days, US president Donald Trump. Unfortunately, one of the only other major political figures to be invited, Democratic senator Bernie Sanders, wasn’t about to let anyone forget. On the opening day of SXSW Interactive 2018, he told a huge crowd at the Austin Convention Centre that the United States had the least qualified person in American history as their president. There weren’t many in the audience who disagreed.