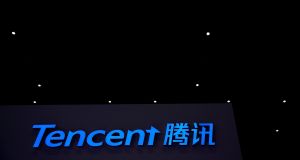 Naspers, which still has a 31.2 per cent stake in Tencent, said it has no plans to further reduce its holding for the next three years

Tencent’s shares fell more than 4 per cent on Friday, wiping out around $23 billion of market value, after the Chinese internet firm’s largest shareholder, Naspers, lowered its stake for the first time in 17 years.

The Hong Kong-listed stock opened almost 8 per cent lower at HK$405, its lowest start since February 9th, and closed at HK$420. Bourse data showed it was the most traded stock on Friday, with turnover of HK$126 billion ($16.05 billion).

Tencent has now lost more than $51 billion in market value in two days, having fallen 5 per cent on Thursday - its steepest in over six weeks. That decline came after Tencent late on Wednesday reported better-than-expected profit but missed analysts’ revenue estimate and said aggressive investment might squeeze profit margins.

With a current market capitalisation of $508 billion, Tencent is still Asia’s most valuable listed firm and fifth globally behind Apple, Alphabet, Amazon and Microsoft.

South African media and e-commerce group Naspers said on Friday it raised $9.8 billion from the sale of 190 million Tencent shares, or 2 per cent of its holding. It said it will use the money to strengthen its balance sheet and fund growth.

“It’s always hard to sell a fantastic asset like this, particularly one in which you have such great belief for the long term. So yes, it wasn’t an easy decision,” Naspers Group chief financial officer Basil Sgourdos told Reuters.

“It is not driven by any view on Tencent and the opportunities we see going forward. It’s really driven by increased confidence in our e-commerce segment and the returns it is delivering, so we need capital to grow that business,” he said.

Naspers, which still has a 31.2 per cent stake in Tencent, said it has no plans to further reduce its holding for the next three years.

Bernstein analyst Bhavtosh Vajpayee said the sale of a small portion of Naspers’ stake cannot be considered a judgement on Tencent’s prospects or expensive valuations.

“We think the sale could have been better timed. Coming amidst trade war fears in the markets as well as a mixed result for the fourth quarter of 2017, the news of the sale was quite a surprise,” he said. “Oddly timed is how I would describe this.”

Naspers’ interest in Tencent goes back at least as far as 2001 with a $33 million bet on the newly founded Chinese firm. Tencent’s breakneck growth subsequently helped Naspers transform from a newspaper publisher into a multinational with private equity-style investments.

In a statement, Tencent chairman Pony Ma said, “Naspers has been a steadfast strategic partner over a great many years. Tencent respects and understands Naspers’ decision and looks forward to continuing to work closely together in building a mutually supportive and prosperous future for both companies.”

1 Revenue publishes list of companies tapping State for wage support
2 Trump vs Biden: Stakes are high for the Irish economy
3 Will remote working become the norm?
4 Stripe moves payment processing to Dublin due to Brexit
5 How long can Government afford to keep State pension age at 66?
Real news has value SUBSCRIBE