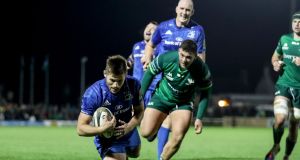 The Leinster and Connacht rugby teams are among Kitman’s clients. Photograph: Dan Sheridan/Inpho

Irish sports tech company Kitman Labs has raised an additional $5.1 million (€4.62 million) in funding and said it has more than doubled new sales and annual recurring revenues over the last year.

Kitman is a sports science company working to reduce the risk of injury within professional sports. It uses artificial intelligence and data science to improve athletes’ health, welfare and performance.

Founded in 2012 by Stephen Smith and Iarfhlaith Kelly, the company has raised over $20 million to date, including $9 million in a fundraise announced last year.

Among the individual teams it counts as clients are Irish provincial rugby teams Leinster and Connacht, along with soccer teams such as AS Roma, Everton and Norwich City.

Kitman, which does not disclose revenues, said that over the last 12 months it opened new markets in Italy’s Serie A, Japan’s Nippon Professional Baseball, and China’s CSL, and added new teams in the NHL, MLB, NCAA, MLS, Top League, Bundesliga, and English Premier League, including a top three side. The company also entered the youth sports market.

Everything we do starts and ends with a team’s performance. Our solutions are researched and built from this principle

Current investors Blue Run Ventures and Pete Kight participated in the latest fundraise in addition to a new group of investors. The company said it would use the funding to further fuel expansion over the next 12 months.

Kitman, which has offices in Dublin, Silicon Valley and Sydney, was named on Fast Company’s prestigious annual list of the world’s most innovative companies earlier this year.

“Everything we do starts and ends with a team’s performance. Our solutions are researched and built from this principle, and our best practices ensure we provide the support our customers need to achieve their desired outcomes,” said Mr Smith, the company’s chief executive and a former injury rehabilitation and conditioning coach for Leinster Rugby.

Sports tech has become fertile ground for Irish companies, with a number of successful start-ups making waves. These include StatSports, which made headlines around the world last year when it signed a lucrative five-year contract with the US Soccer Federation. It also recently announced that soccer stars Raheem Sterling and Alex Oxlade-Chamberlain had each invested seven-figure sums in the company and agreed to become global ambassadors as part of a new funding round.

Elsewhere, Orreco, a Galway-headquartered start-up whose backers include golfer Graeme McDowell, has signed a number of significant deals in recent months, including one with NBA side Atlanta Hawks. Other sports teams it works with include Newcastle United and the Dallas Mavericks.