Review: It’s packed with far too many features, but as a fitness device it’s hard to beat 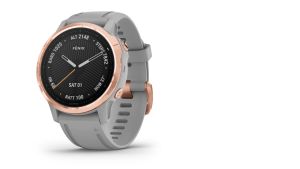 When it comes to fitness watches, Garmin has certainly put on a good show. From the running-focused Forerunner to the more broadly appealing Vivoactive, Garmin has been keen to make its mark and emphasise its fitness credentials. And it’s no wonder, with the likes of Samsung and Apple making a strong pitch for its customers.

The latest round of smartwatches from Garmin includes the Fenix 6S Pro. The multisport watch includes built in GPS and is water-resistant to a depth of 300m.

I have experience with the Garmin Fenix range. Last year, I tested the Fenix 5S Pro Sapphire edition while suffering through Hell & Back. The watch made it (with ease) and so did I (barely).

The new Fenix 6S Pro is more of the same, although this particular version is a little more in keeping with my style. The white and rose gold design means it doesn’t immediately scream “fitness watch”, until you look closely. It’s also smaller at 42mm, and comes with a 1.2-inch colour display.

The battery life isn’t quite as good as some of the Garmin fitness watches, but that is putting in the context of the 14-day battery life of the Instinct watch. Put up against other smart watches, it blows a lot of them out of the water. Garmin says nine days, though this will depend on how much you use GPS and other sensors. I got almost a week out of it, with a few GPS-tracked walks and jogs.

If you want to get longer out of it, one menu option shows you how long you can extend the battery by switching off a few sensors. It means you don’t need to keep a tight grip on your charging cable, and, even with five days away in the middle of the test, I didn’t need to recharge it until I got home. That is a bonus for me, because inevitably I forget to bring at least one cable on every trip, and it’s usually the one for my watch.

That extended battery life is down to the new smart battery manager; it’s probably also helped by the lack of a touchscreen. The Fenix 6S Pro, like its predecessor, has a button interface: three on the left side of the case to control backlight and scrolling through menus, and two on the other to select options, go back a step on the menus and mark laps as you exercise.

You don’t really feel the lack of a touchscreen, though. There are plenty of functions on the Fenix 6S Pro. You can choose from a wide range of fitness activities from running and swimming to golfing, hiking and mountain biking. Maps and music will show you where you are going and keep you entertained while you’re getting there. With built-in GPS and storage for music, you don’t need to bring your phone with you while you exercise.

It also measures your sleep at night, linking up with the Connect app on your smartphone to relay the details. If you are in any way sensitive to the strap, however, you may find a few hours’ break at night is the difference between a comfortable wear and a slight itch.

If you want to push the Fenix 6S Pro to its limits, you’ll need a lot of time. It measures everything from your heart rate to pulse ox, which it will now do either throughout the day, or at night while you sleep. I was still finding new features a week into the test; even reading the list made me feel tired. If you are looking for a fitness watch to help improve your training, this watch is more than likely going to cover your every need.

It also works as a general smartwatch, giving you notifications for calls and texts right to your wrist. It has no microphone, though, which means you can only reject calls rather than bust out your best Dick Tracey impersonation.

The good The battery life is great, and the watch will display its projected battery life on the screen, taking all the guesswork out of it. Plus there are plenty of sports to choose from.

The not so good It is pricey, and the average user probably has no need for half the features on it.

The rest There is the ability to track your position live, with incident detection features that will help people find you should you go Awol on a hike.

The verdict This may be overkill as a simple smartwatch, but as a fitness device, it’s hard to beat.