Social network to take Irish headcount to 2,000 by middle of next year with new hires 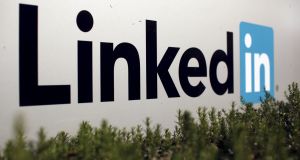 LinkedIn has 630 million members globally, including two million in the Republic

LinkedIn is to create 800 new jobs in Dublin and hopes to fill a significant number of these roles by encouraging those who have left the workplace to return.

The company said given that the Republic is at full employment it is expanding its ‘ReturnIn’ programme, which provides support for individuals returning to employment after taking time out to look after children or act as a carer.

LinkedIn said recruitment for the additional jobs has already started, with 100 jobs currently available in areas such as sales, marketing, customer service, finance and analytics. The company intends to fill all the new roles by the middle of next year in a move that will take its Irish headcount to 2,000 people.

However, the head of its Irish arm Sharon McCooey sidestepped questions on whether it had lobbied the Government on the housing crisis amid concerns about the likely impact on the new roles on the rental sector.

Properties for rent reached a record low as prices hit a new high in the Republic last month, according to figures from Daft.ie with just 2,700 homes available to rent. A spate of big job announcements from tech companies such as Facebook and Salesforce in recent months has led some to worry that the housing crisis could worsen.

In the US, LinkedIn has previously partnered with the Silicon Housing Trust to build affordable housing in the Bay Area but Ms McCooey said that locally it was predominantly focused on developing its new offices.

“We have a good working relationship with all of the Government agencies and think the Government is doing the right thing in terms of putting down infrastructure for the future,” she said.

The social network said the new jobs were a result of increased growth in its business in Europe, the Middle East and Africa (EMEA).

LinkedIn, which has 630 million members globally, including two million in the Republic, last year signed a lease for a new 13,935sq m (150,000sq ft) development at One Wilton Park in Dublin 2, which is due to open in late 2020. It said it will also retain its current offices at the same location.

Founded in 2003, the professional networking platform, which is often used by jobseekers, opened its first Irish operation in 2010 with just three employees. It is now the company’s second largest office in the world after its global headquarters in Sunnyvale, California.

According to LinkedIn, someone finds a job via its platform every eight seconds. There are currently 46,000 roles open on the network in Ireland and 20 million globally.

Although LinkedIn has largely escaped the spotlight shone on social networks such as Facebook and Twitter, it did come under fire late last year when an audit by the Data Protection Commissioner revealed its Irish arm had processed the email addresses of 18 million non-members and targeted them with advertising without permission.

1 ‘I don’t need to do any of this. . .I don’t actually need to work.’
2 Admission of mistake in Oxford vaccine dose raises doubts over reliability
3 Direct sea routes to Europe offer certainty in choppy Brexit waters
4 Only way is up for Stripe as valuation skyrockets
5 Promontoria barred from pursuing doctor over Ulster Bank loan
Real news has value SUBSCRIBE