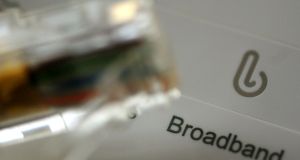 Broadband wholesaler Siro and telecoms group Vodafone aim to supercharge businesses in Cavan with the launch of a new “gigabit hub”.

The hub provides qualifying businesses with one gigabit broadband connections - the gold standard internationally - free of charge for two years in a bid to promote innovation and technology support in the area.

Siro, a joint venture between the ESB and Vodafone, and Vodafone are rolling out 15 such centres across the State to showcase its technology, which it said was three times more powerful than the best service in Dublin.

The Cavan hub was unveiled yesterday by Minister for Culture, Heritage and the Gaeltacht, and Fine Gael TD for Cavan and Monaghan, Heather Humphreys.

“Access to high speed broadband in today’s economy is as vital to infrastructure as canals and roadways were to businesses in the last century, and this project perfectly complements Government policy of encouraging commercial investment in broadband,” she said.

Liam O’Brien, director of strategy and external affairs at Vodafone Ireland, said: “The Gigabit Hub Initiative was created in order to empower local businesses and communities through connected technologies.

In 2015, Siro chose Cavan as the first town to trial the new technology which saw 300 homes in the Aughnaskerry and Rocklands estates equipped with a fibre-to-the-building connections.

The Cavan network now extends to over 4,000 homes and businesses who enjoy the same level of connectivity as leading international hubs like Hong Kong and Tokyo.

Siro corporate affairs director Stephen O’Connor said: “Good connectivity is vital for regional towns competing for investment and jobs and having a one gigabit network in the town and a strategic centre like the CITC makes Cavan attractive for entrepreneurs to establish their business or for companies looking to invest”

Siro’s first gigabit hub in Skibbereen, opened in July 2016, is on course to facilitat the creation of 500 jobs over the next five years in West Cork.