Irish companies receive funding of up to €2.5m each from the European Commission 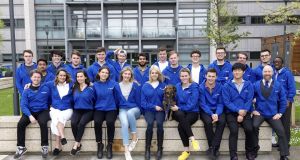 Seven Irish start-ups have received funding of up to €2.5 million each from the European Innovation Council.

Among the recipients are a small Irish start-up seeking to develop “a simple, repeatable way to completely remove a clot from the brain in one pass”, and other new companies working on advanced medical treatments.

Some €16 million has been allocated in total by the European Innovation Council (EIC) to the Irish start-ups.

The announcement of was made on Thursday by the European commissioner for research and innovation Carlos Moedas while on a visit to Dublin.

The initiative was set up by the European Commission to turn science into new business and accelerate scale-up of innovative companies. Currently in its pilot phase, the EIC will be fully in place from 2021 under the next EU research and innovation programme (Horizon Europe) with a proposed €10 billion budget.

– CroiValve in Dublin, which is developing a non-surgical treatment to restore heart valve function;

– Coroflo Limited in Dublin, which has developed what it claims is the world’s first accurate breastfeeding monitor;

– Bluedrop Medical in Galway, which is using AI (artificial intelligence) to manage patients at risk of diabetic foot ulcers with a remote monitoring system using computer vision and machine learning to predict and prevent them arising;

– Perfuze Limited in Galway, which is working on the treatment of brain clots;

– Votechnik Limerick, which is developing automated recycling technology for LCD flat-screen panels and monitors, and;

– Beats Therapeutics in Sandyford, Dublin, which is developing tailored digital therapeutics for neurological and brain disorders.

Meanwhile, Helixworks Technologies, a Cork-based company that has developed technology that allows people to convert any digital files into genetic code, has received EIC pathfinder funding as part of a consortium led by Imperial College London and with participation from two French firms. The consortium’s OligoArchive project secured close to €3 million.

Mr Moedas said the Irish companies “are top-notch”, seeing off competition from all over Europe.

Science Foundation Ireland director Prof Mark Ferguson has been appointed to the post of chair of the new EIC advisory board which will have a key role in finalising the Horizon Europe programme. Dermot Diamond, principal investigator at Insight Centre for Data Analytics, DCU, and Valeria Nicolosi, chair of nanomaterials and advanced microscopy, TCD, have also been appointed to the board.

Mr Moedas said Prof Ferguson, who also advises the Government on science, was appointed based on his “track record, energy and amazing communications skills”.

The programme, which is managed by Trinity College, is now in its seventh season with alumni including Foodcloud, Touchtech and Artomatix.

Since 2013, some 70 student ventures have created 130 jobs and raised €9.4 million in investment and funding through the accelerator.