De facto head charged over merger of two units in 2015 and allegations of $3.9bn accounting fraud 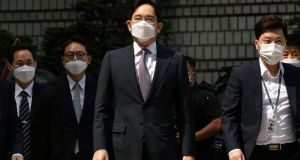 Samsung heir Lee Jae-yong (centre), vice-chairman of Samsung Electronics, arriving in court for a hearing to review the issuing of his arrest warrant on June 8th. Photograph: Jung Yeon-je / AFP via Getty

South Korean prosecutors have indicted Lee Jae-yong, the de facto head of Samsung, on charges of stock manipulation relating to the controversial 2015 merger of two Samsung units and over allegations of a $3.9 billion (€3.25 billion) accounting fraud at the group’s biopharmaceutical unit.

The latest escalation in the long-running legal saga embroiling South Korea’s biggest company has prompted concern among international investors, who say it has deepened uncertainties over the future of the world’s biggest manufacturer of computer chips, smartphones and electric displays.

On Tuesday, prosecutors in Seoul accused Mr Lee and 10 of his senior lieutenants of spearheading illegal moves to cement Mr Lee’s control over the group’s crown jewel, Samsung Electronics. The charges include violation of capital market laws and unfair trading during the controversial merger of Samsung C&T and Cheil Industries.

Critics have said the merger was designed to transfer power at Samsung to the billionaire heir-apparent.

The 11 also face charges of violating rules around external audits of corporations and making false testimony, according to the Seoul Central District Prosecutors’ Office.

“We’ve found Samsung Group’s involvement in various illegal activities including systemic unfair trading, stock price manipulation and breach of trust in the merger process of Samsung C&T and Cheil Industries as part of the succession planning,” the prosecutors’ office said in a statement on Tuesday.

Mr Lee’s lawyers called the prosecutors’ accusations against their client and his lieutenants “groundless”. Samsung did not immediately comment. The company has previously denied all wrongdoing related to the case.

The latest allegations have returned to the spotlight Samsung’s succession and opaque corporate governance just as the company is grappling with the economic fallout from the coronavirus pandemic.

“As a shareholder, we are concerned about the protracted legal wrangling and uncertainties,” said Park Yoo-kyung, an adviser at APG Asset Management, the Dutch pension fund.

An investment manager at a US hedge fund cautioned that the latest legal problems could distract Mr Lee from focusing on growth opportunities. “Although daily operations will not be affected, ballooning legal problems could slow Samsung’s decision-making process on important issues like big acquisitions,” said the person, who asked not to be named.

Financial regulators in Seoul previously ruled that Samsung BioLogics, a biopharmaceutical unit of Samsung Group, inflated the value of its affiliate Samsung Bioepis by $3.9 billion in 2015. Samsung BioLogics has denied any wrongdoing, saying that it followed international accounting rules.

Samsung has been helmed by Mr Lee, the 52-year-old son of group chairman Lee Kun-hee, since 2014 after his father suffered a heart attack.

Mr Lee will not be detained while he undergoes trial. The case is separate from his ongoing proceedings over bribery charges linked to former South Korean president Park Geun-hye. Mr Lee was granted early release in 2018 after spending a year in jail over the bribery case.

Paul Choi, head of research at CLSA in Seoul, downplayed the impact of the latest legal case and said it would cause few problems for Samsung’s operations. “He has already been to jail. This happened several years ago so additional damage from this seems limited,” he said. – Copyright The Financial Times Limited 2020