Offr raises €3m in funding round led by Barclays

Property tech company plans to expand to the UK and Australia 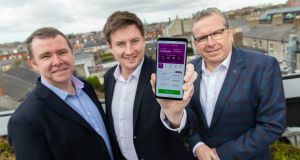 Irish property technology start-up Offr has raised €3 million in seed funding to support its growth in Ireland and expansion into Britain and Australia.

The funding round was led by Barclays, and included 30 Irish and overseas investors. The company had initially targeted €1 million for the funding round.

It brings Offr’s total funding to €4 million, with previous investors include Delta Partners, Frontline Ventures and Enterprise Ireland. A number of private investors are also backing the firm.

Launched nine months ago, Offr is digitising the buying, selling and leasing process for estate agents and buyers, including payments and signatures. It provides secure and transparent bidding and transaction technology. It was founded by chief executive Robert Hoban, chief commercial officer, Philip Farrell, and chief technology officer, Niall Dawson.

A participant in the Barclays London Accelerator earlier this year, Offr was selected for follow-on investment.

“Our target was to raise another million so to treble it in the times we’re in is extraordinary,” said Mr Hoban, saying Barclays’ backing was a vote of confidence in its proposition. “This funding will enable us to grow our Irish team and particularly in a pandemic, we’re delighted to be able to create job opportunities.”

The pandemic provided an opportunity for the company to showcase its technology. It launched a facility combining 3D virtual tours with YouTube video playback and live-stream ability, allowing estate agents to do walk-throughs in real-time using their smartphone, and also conducted what it said was the world’s first digital property transaction during the lockdown, with Sherry Fitzgerald selling six apartments in an online auction .

“Ireland has in recent years become somewhat of a hotbed for tech innovation and start-ups and Offr is another exciting example of that,” said Martin Cass, director in private bank, Barclays Bank Ireland. “Having come through our accelerator programme, we are delighted they have become the first Irish company to receive a follow-on investment from Barclays, which is an example of what’s achievable for all the other exciting Irish technology start-ups out there.

“We are very pleased to be supporting Offr through this exciting period of growth and look forward to working with them to help scale their business internationally and realise their considerable future ambitions.”