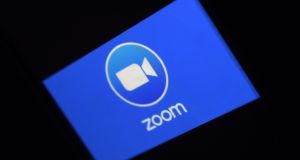 Soaring demand for the Zoom video conferencing service far exceeded even the most optimistic Wall Street forecasts in the past three months, lifting quarterly revenue higher than the San Francisco-based company reported for the whole of 2019.

The boom fuelled a 25 per cent leap in Zoom’s shares in after-market trading on Monday and left it with a stock market value of $114 billion(€95 billion), or more than half as much as the communications giant AT&T.

The company, whose name has become almost synonymous with working and learning from home during the pandemic, reported revenues of $663.5 million for the period to the end of July – a 355 per cent increase from the year before – and an acceleration from the 270 per cent growth in the months after the pandemic hit.

Most analysts had expected quarterly revenue of about $500 million. Revenue for the entire last fiscal year, which ended in January, reached $623 million.

Zoom’s ability to reach a massive new global audience has made it one of the biggest corporate winners from the crisis, though the scale of the demand has also brought problems, leading to a temporary service failure last week just as schools around the US were asking students to log in for classes.

Speaking on a call with analysts late on Monday, Eric Yuan, Zoom’s founder and chief executive, said the company had faced plenty of challenges from the rapid growth. But he also said it had completed the emergency fixes it promised after a spate of security and privacy lapses earlier this year.

This year’s crisis has given Zoom an instant base of large business and government customers that would normally have taken years to build. That has raised hopes on Wall Street that it can cross-sell other services to become a full-scale communications company – starting with an internet-based voice service to replace the PBX systems from traditional phone companies such as AT&T that are still widely used today.

Mr Yuan hinted at the next phase of Zoom’s growth on Monday, commenting that many customers were “moving beyond immediate business needs” in the crisis to make longer-term plans for operating with more remote workers. He also said the coronavirus crisis was prompting customers to look at updating all their communications, including voice systems.

One of Zoom’s biggest priorities now is to hire sales people and engineers fast enough to take advantage of the demand, said Kelly Steckelberg, chief financial officer. It had opened two new research and development centres in the US and was “rebalancing” its engineering workforce in a way that was making it less dependent on its outpost in China, she said.

Asked if geopolitical tensions had led the company to rethink its R&D presence in China, Ms Steckelberg would only say: “We don’t have any current plans to move our engineering talent out of China.”

However, Zoom has had even faster growth in demand from smaller customers, adding a new and unpredictable twist to its business. The share of its revenue from businesses with fewer than 10 employees jumped to 36 per cent, from 20 per cent a year ago, the company said. Many of these pay by the month rather than buy annual contracts, leading to a higher churn rate as more customers give up the service each month.

The shift also hit its gross profit margin, which fell by about 10 percentage points in the latest quarter, to 71 per cent. Despite that, profits jumped as Zoom was able to spread its fixed costs over a far larger revenue base. Its pro forma earnings per share - excluding stock compensation benefits and some other costs - reached 92 cents, up from 8 cents a year before and more than double the 45 cents analysts had expected.

Based on formal accounting principles, net income rose to $186 million, from $6 million the year before.

For the current fiscal year, Zoom said it expected revenue to reach $2.37 billion-$2.39 billion, about 30 per cent ahead of analysts’ estimates, with pro forma earnings per share of $2.40-$2.47, or 85 per cent ahead of expectations. – Copyright The Financial Times Limited 2020

1 ‘I don’t need to do any of this. . .I don’t actually need to work.’
2 Basic income for all: Has the Covid crisis given us a new economic model?
3 Promontoria barred from pursuing doctor over Ulster Bank loan
4 Only way is up for Stripe as valuation skyrockets
5 Irish designer of Oxford vaccine: ‘I’ve never worked so hard in my life’
Real news has value SUBSCRIBE