The company has pledged to build on its Irish sustainability programme, with water conservation among its priorities 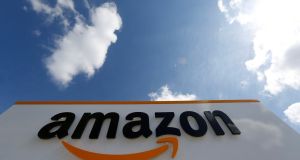 Amazon employs 4,000 people directly in Ireland, with research commissioned by the company estimating there are an additional 9,700 people employed due to its investments, including in wind farms. Photograph: Reuters

Amazon is set to double its renewable energy capability in Ireland with a new wind farm project.

The 115-megawatt (MW) project in Ardderroo, Co Galway, will support Amazon Web Services (AWS) data centres in Ireland, and is set to begin operations in 2022, with up to 27 turbines on the site.

It joins previously announced projects in Esk, Co Cork, which is set to begin operations next month, and Meenbog, Co Donegal, which will come online in early 2022.

The corporate power-purchase agreements, which are not being subsidised by the State, will add 229MW of renewable energy to the Irish grid each year, the equivalent of powering 185,000 homes and will cut carbon emissions by 366,000 tonnes each year. It will also contribute to the Government targets on renewable energy.

“These are truly what we could call ‘grid additional’ so these would not happen but for our investment,” said Mike Beary, AWS Ireland country manager.

Any State subsidy would result in a €229 million bill to Irish energy customers, through the Public Service Obligation levy over the lifetime of the projects, Amazon said.

“This larger project is doubling down on our commitment to renewable capacity in Ireland,” said Kenneth Matthews, head of energy services for EMEA with AWS.

“We think it’s a worthwhile contribution towards sustainability. Because these projects are unsubsidised, it proves that wind energy can stand on its own feet and be delivered without subsidisation.”

Amazon has publicly stated a commitment to have its global operations 100 per cent powered by renewable energy by 2025. That includes its operations here, which comprise a number of data centres and offices, with the company set to expand its facilities with the opening of a new campus in Dublin.

The company has pledged to build on the sustainability programme, with water conservation among its priorities. Amazon’s data centres mainly use free air cooling, with water only required for cooling for 5 per cent of the year.

“Our buildings in Ireland would use the equivalent amount of water annually as eight Irish homes,” Mr Matthews said. “Our goal is to significantly reduce our reliance on water supply, with the goal to have little or no water coming from the Irish grid.”

The company intends to do that by using rainwater harvesting, redesigning the roofs of the new data centre buildings to offset the water used from the local supply.

Amazon employs 4,000 people directly in Ireland, with research commissioned by the company estimating that there are an additional 9,700 people employed due to its investments, including in wind farms.

“Over the last eight years we have invested directly about €2 billion in capital and ongoing costs here,” Mr Beary said. “When you add the induced and downstream impact in terms of our subcontractors and suppliers, we reckon that creates about a €5 billion level of economic activity in Ireland.”