Salesforce to buy Slack in deal worth $27.7bn

Cash and stock deal is largest in cloud software industry 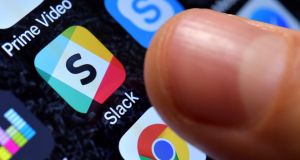 Slack has been bought by Salesforce for $27.7 billion. It is the biggest acquisition for Salesforce so far. Photograph: Sascha Steinbach/EPA

Salesforce on Tuesday capped cloud computing’s 2020 work-from-home boom with an announcement that it would pay $27.7 billion for workplace chat app Slack, setting up a battle with Microsoft for pole position in one of the tech market’s hottest corners.

The cash-and-stock deal is the largest in the soaring cloud software industry, beating Microsoft’s $26.2bn purchase of LinkedIn four years ago.

Investors in Slack would receive $26.79 in cash and 0.0776 shares of Salesforce for each of their shares, the companies said in their announcement, indicating about a 55 per cent premium to the value of Slack shares before news of their talks emerged. The deal is expected to close in the second quarter of 2022.

The combination brings together Slack’s chat service, which reached more than 12m daily users last year, with Salesforce’s wider range of sales, marketing and other business software. The union would provide an easier way for workers to tap into Salesforce’s software and make it a stronger rival to Microsoft, said Alex Zukin, analyst at RBC Capital Markets. “Ultimately, it’s about Microsoft - they have it all,” he said.

Bret Taylor, Salesforce president and chief operating officer, said the pandemic had forced consumers and workers to rely more heavily on digital services, prompting the company to speed up efforts to build a more complete platform. “We really see the world as fundamentally having shifted this year,” he said, adding: “We think the new way of working is permanent.”

The deal also highlights the increasing consolidation in the cloud software sector, which revolves around digital services, often paid for through regular subscriptions, rather than the sale of software for customers to install on their own computers.

Microsoft and Salesforce have between them sealed six of the nine largest cloud software acquisitions, putting the two companies in the lead as access to digital services becomes a more common way for companies to buy technology. SAP and Oracle have also turned to cloud dealmaking to accelerate the transformation of their traditional software businesses and keep up with the new buying habits.

Salesforce has earned a reputation for paying big premiums for acquisitions over the past two years, which has added to Wall Street’s wariness and wiped some $28 billion from the company’s value since news of talks with Slack emerged. Marc Benioff, Salesforce chief executive, suggested in August that his company would avoid more deals due to high stock prices.

Mr Taylor said the high premium Salesforce was paying was justified because the value of Slack to its customers had “dramatically increased over the course of the year” due to the pandemic. He added that “the market is very unusual this year”, forcing the company to re-evaluate as it tries to ramp up product development.

“The burden of proof is squarely on their shoulders to convince investors, when they said they wouldn’t be doing anything like this for a while,” said Mr Zukin. But he and other software analysts welcomed the strategic rationale for the deal, which gives Mr Benioff a new weapon against Microsoft while opening the way to selling Slack’s service through a much larger sales team.

The purchase price sets a new high mark for fast-growing cloud software companies and highlights their scarcity value at a time when large parts of the economy are struggling, said Neeraj Agrawal, a partner at Battery Ventures. At around 25 times expected revenue next year, the price was a big step up from 16 times Salesforce paid for MuleSoft in what was considered a very high-priced deal two years ago, he added.

Slack had appeared vulnerable after reporting two quarters of disappointing results and missing out on this year’s cloud software boom. Other companies in the sector have seen share prices surge as customers were forced to invest more heavily in digital services to maintain their operations and keep workers connected during the pandemic.

Before news of the potential deal broke last week, Slack’s shares were more than 20 per cent below the level reached on the company’s first day of trading after going public last year. By contrast, the BVP index of leading cloud stocks has risen 88 per cent since the start of this year, with Salesforce up 45 per cent.

Stewart Butterfield, Slack co-founder and chief executive, stands to be one of the biggest winners from the sale, with a stake valued at $1.9bn. Other large Slack investors include venture capital group Accel, whose stake is worth $2.9bn, and SoftBank, with $1.7billion.–Copyright The Financial Times Limited 2020