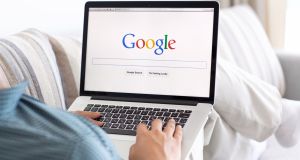 Turnover at Google Ireland rose by €7.6 billion last year to €45.7 billion as the amount it paid in tax fell by nearly €9 million to €263 million.

Accounts newly filed at Companies Office show that Google Ireland recorded a €1.94 billion pretax profit in 2019 up from €1.7 billion a year earlier. Its employee numbers in Ireland rose nearly 10 per cent to 4,131.

Google runs its search and advertising business for Europe, the Middle East and Africa (EMEA) from Dublin and it also has two data centres in the capital.

The company said cost of sales increased by €2.7 billion last year to €11.6 billion due primarily to traffic acquisitions costs. Administration expenses rose €4.6 billion to €29.7 billion, largely due to the increase in headcount, a rise in the royalties paid to another group company and increased sales and marketing.

Google Ireland also incurred €267.7 million in costs in providing contract research and development services to other group companies in 2019.

“2019 was a strong year of sustained growth for Google Ireland as we continue to deliver value for our advertisers, publishers and partner networks across Europe, the Middle East and Africa,” a company spokeswoman said.

“As well as growing our turnover, we also added more than 350 new jobs last year.”