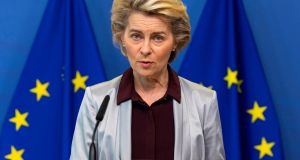 Ursula von der Leyen was speaking in Portugal at the opening of this year’s digital-only Web Summit. Photograph: Olivier Matthys/Pool/AFP via Getty

Ms von der Leyen promised new regulations that would see one set of core digital rules across Europe, which could be changed through the Digital Services Act and Digital Markets Act, bringing the single market into the digital world.

The European Commission is also set to invest in a €750 billion recovery plan, Next Generation EU, which will dedicate 20 per cent of its budget to digital investment and promote common data spaces to foster industry collaboration and innovation.

Ms von der Leyen was speaking in Portugal at the opening of the Web Summit, the tech conference organised by Paddy Cosgrave.

The event has gone digital-only this year as the coronavirus pandemic continues to spread throughout the continent, with about 100,000 “attendees” expected.

“The impact of the so-called deep tech in our lives is more visible than ever,” said von der Leyen. “Businesses of all types have digitalised all or part of their operations, from production to sales and customer care. Thanks to this, they are surviving the lockdowns.”

Ms von der Leyen said the pandemic had acted as a catalyst and accelerator of change, with Europe now attracting more capital for start-ups and seed stage than any other region in the world.

“However, these trends had already been visible for quite a while. In the last five years, the value of European tech companies has quadrupled. Europe has the highest number of top artificial intelligence scientists,” she said.

She noted the barriers to companies trying to grow, which she said had resulted in too many start-ups leaving Europe in pursuit of growth, a situation she hopes will be addressed by her plans for a single digital market and the investment by the commission.

She also noted the balancing act that platforms faced. “No one expects all digital platforms to check all the user content that they host. This would be a threat to everyone’s freedom to speak their mind,” she said. “But if illegal content is notified by the competent national authorities, it must be taken down.”

The Web Summit will take place over the next three days, with appearances by a range of speakers, including Serena Williams, Slack cofounder Cal Henderson, actor and comedian Kevin Hart and Zoom founder Eric Yuan.