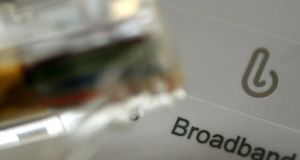 A State-backed fund created by Irish Life Investment Managers and a Luxembourg infrastructure investment firm are vying to buy a 47 per cent stake in Limerick-based broadband firm Enet in a deal that could value the company at up to €200 million.

Enet is one of three firms currently competing for contracts under the Government’s National Broadband Plan to cover over half a million homes and businesses in coverage black spots, which will involve a State subsidy of up to €600 million.

Sources said the Irish Infrastructure Fund – which was set up by Irish Life in 2012, backed by the Ireland Strategic Investment Fund and managed by Sydney-based AMP Capital – and Luxembourg-based Cube Infrastructure Managers are competing for the stake, which is being sold by American private equity firm Oak Hill Advisors.

Enet is said to have an enterprise value, including debt, of €150 million-€200 million.

Oak Hill backed telecoms investors Granahan McCourt, led by Irish-American David McCourt, in a deal to acquire Enet in 2013 for a price that was reported to be in the region of €43 million. Enet’s core business is managing the State’s network of metropolitan area networks in 94 towns around Ireland, selling broadband packages to retail service providers.

The Granahan McCourt-led consortium has invested €100 million integrating the metropolitan area networks and expanding Enet’s fibre services to businesses. The company is understood to command about 40 per cent of Ireland’s nascent fibre-to-the-home (FTTP) broadband market.

A successful bid by Enet for one or both of the 25-year National Broadband Plan contracts would significantly enhance the value of the company. Enet is competing with Eir and Siro, a joint venture between ESB and Vodafone for the lucrative contracts.

A new investor taking on the Oak Hill’s stake in Enet would also have to be supportive of the company’s – and its main investor, Granahan McCourt’s – plans to expand the business’s reach elsewhere in Europe.

Representatives for Granahan McCourt, Oak Hill, Irish Life and AMP declined to comment. No one was available at Cube in Luxembourg to speak to The Irish Times after normal office hours on Friday evening, while an executive at the firm did not respond to an email seeking comment.

The Irish Infrastructure Fund’s investments include Towercom, Ireland’s largest independent owner of telecoms masts, wind-farm assets and a vehicle with interests in primary care centres in the Republic.

Cube, set up in 2007, is focused on telecommunications infrastructure, energy supply and public transport, mainly in western Europe. The company is a leading fibre network provider in France, and, through its ownership of a company called Covage, is responsible for the roll-out and operation of 39 fibre networks in the country. This provides a platform for 200 services providers to bring fast broadband to 1.3 million homes.