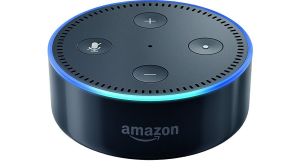 “She’s talking to me!” If you want to see a genuinely delighted reaction to Amazon’s Echo, try getting a two year old to talk to Alexa. While the rest of us are a bit hesitant about having a conversation with Amazon’s AI assistant, she will happily babble at the device and be happy just to get a response. I swear, she gets human interaction too.

Amazon’s Echo Dot arrived into our home a few weeks ago, and while it hasn’t exactly made itself indispensable, it has made life a little easier – and not just because it’s a source of wifi-connected toddler entertainment.

The Echo Dot is the smaller sibling to the Amazon Echo, shaped more like a hockey puck to Amazon’s full-size speaker (which also happens to cost three times the price), with four buttons on top to control volume and kick it into action. It’s less imposing and more subtle than the Echo – and it even surpasses the original in some respects. It has better long-range audio recognition capabilities than its bigger sibling, mainly because it’s newer; it will also connect to your other bluetooth speakers, which the regular Echo doesn’t.

First thing to know: the Echo Dot is not available to buy in the Republic yet. You’ll need access to an address in the North or Britain to get hold of the Dot. If you are on iOS and want the official Alexa app to set up the Dot, you’ll need access to a US or UK iTunes account; the official app isn’t available in the Irish store yet, although you will find plenty of third-party apps for Alexa.

Once you’ve got it set up though, the question is: what exactly does the Dot do? Plenty, actually. It can give you a news bulletin every morning, configured with your personal choice of news sources – RTE News Now covers the Irish aspect – or read your audio books on your Audible account, along with some select Kindle books. The Echo will play your music too if you have a Prime Music account.

The most useful thing it does though is control your smart home devices. You can connect your Nest Thermostat or Wemo plugs to it, and then issue voice commands to Alexa – “set living room temperature to 20 degrees” or “turn on TV” – that make you feel less like you are talking to an uncomprehending robot. It’s the ultimate in convenience – or laziness, depending on your perspective.

At the very least, you can get Alexa to tell you a dodgy joke or sing to you, if you feel so inclined

One area where the Dot is definitely below par is if you want to use it to play music from your mobile device. Don’t bother; the speaker is average at best, especially compared with the 360-degree speaker that’s on the regular Echo. But then you aren’t buying – or shouldn’t buy – the device for its music capabilities. The Echo Dot can also be connected to another speaker through bluetooth or an auxiliary cable, so if you already have plenty of options, there is no point in shelling out for the bigger Echo.

There’s also the privacy aspects to take into account. The Echo Dot is always listening – it needs to be to pick up the “wake word” when you use it, so it sends audio to the cloud, including a fraction of a second before the wake word is used – and that may cross the line for some people concerned that Amazon has access to all their conversations too. In fact, the Echo has already been the subject of a warrant issued as part of a US murder investigation. Amazon refused to hand over the data.

There is one easy way to solve that: you can turn the Echo Dot’s microphone off. When you have the mic muted, the device glows red around the edges. If you don’t trust that, you can easily unplug the Dot. There’s no rechargeable battery inside, so once you cut that cord, the device instantly switches off.

The Echo Dot is the budget option in terms of price, but the tech inside it is every bit as good as the Amazon Echo. In fact, in some instances it’s better; the Dot has better long-range voice recognition, for example, and it will connect to other speakers, which the original won’t. It’s also more portable, though you won’t be carrying it around with you

The Echo and Echo Dot are not strictly available in Ireland yet, so if you want one, you’ll have to get it delivered to a UK address – Parcel Motel, Parcel Wizard or An Post’s Address Pal. It also causes issues with getting the app – it’s not in the Irish iOS store, although Android users may fare better by getting the software outside the Play Store. That also means it won’t work with all the services that Amazon has lined up, though perhaps when it gets its official launch, that will change.

You can buy several Echo Dots for around the house; when you say the wake word, the system will automatically activate the Dot nearest you.

You don’t strictly need an Echo Dot, but it certainly has a convenience factor to it. Whether that’s enough to push you to put yet another connected device in your home is another matter.