Online giant’s pretax profits increased by more than 30 per cent to €39.46m 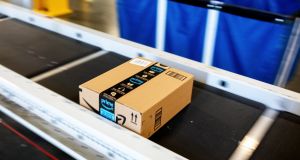 Pretax profits at the main Irish arm of online giant Amazon last year increased by 30.5 per cent to €39.46 million as revenues soared.

New accounts filed by Amazon Data Services Ireland Ltd (ADSIL) show the firm recorded the increase in profits as revenues jumped by 49 per cent from €1.1 billion to €1.65 billion.

ADSIL is Amazon’s main data centre business, where consumers who sign up to the company’s cloud service to store data remotely see it stored in the Republic. It generates revenue by charging group entities for the use of its services rather than charging clients directly.

The company’s administrative expenses in 2018 increased from €1 billion to €1.6 billion. Non-cash depreciation costs climbed from €680 million to €801 million.

Research and development costs increased more than sixfold from €9.9 million to €70.7 million. Operating lease costs at the firm increased to €21.28 million.

The company paid corporation tax of €11 million on its profits, leaving a post-tax profit of €27.6 million.

The increase in numbers employed by the firm resulted in staff costs increasing from €117.98 million to €151.4 million.

Five directors served during the year and pay to directors increased by 31 per cent from €1.23 million to €1.62 million. This included shared-based awards of €1.03 million.

At the end of December last, the company’s shareholder funds totalled €845.57 million. Its accumulated profits increased from €100.96 million to €128.58 million.

That company employed 1,011 at the end of December last. It recorded a pretax loss of €3.56 million after incurring administrative expenses of €122.6 million.

At the end of December, the company had shareholder funds of €19.43 million.

The group is understood to be close to signing up for a large office space at Charlemont Square in Dublin 2, the development being undertaken by the McGarrell Reilly Group.

Amazon already employs more than 2,500 people in the Republic and announced plans last June to create another 1,000 jobs here over the next two years, with the majority of these at its subsidiary Amazon Web Services in Dublin.

These new jobs will be at Amazon’s Dublin sites in Blanchardstown, Tallaght, the city centre and north Co Dublin.