Is it possible to get fit while sitting on your sofa?

BionicGym: Review: It won’t replace running, but it’s handy for when you can’t get to the real gym

Ciara O’Brien tests out the Bionic Gym claim that you can get fit and burn calories sitting on your sofa by strapping their electro stimulation wearable device device on . Video: Bryan O’Brien 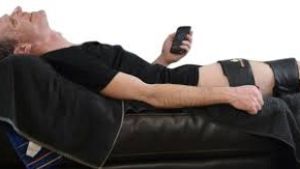 It certainly takes some getting used to, and BionicGym advises you to build up the intensity gradually. Take that advice.

Imagine something that could sort out your exercise needs while you sat on the sofa. Or worked at your desk. Or even during a long commute. Sounds too good to be true, right? But that is what BionicGym, a muscle stimulator, claims to do.

When you hear muscle stimulation, you might think of the ab stimulator belts that have been around for decades, and be a bit sceptical. It’s a similar technology, but used in a different way; I can’t say I’ve ever broken a sweat with an ab belt. BionicGym stimulates your legs, and if you use it at high-enough levels, you’ll certainly feel like you’re running a marathon. Of course, you’re not, but more on that later.

BionicGym has three parts: the wraps, which hold the electrodes and attach to your thigh; the unit, which is the brains of the BionicGym and fits into a pocket on the thigh wrap; and the app, which controls it all.

When I started this test, I shelved all other cardio activities. The only thing I kept up was walking – but with two small, slow, meandering children, and the inclement weather lately, even that tailed off.

To keep things straight, I drafted in a professional: Mark O’Reilly of FitVision. He put me through some fitness tests and took some measurements so I could see if BionicGym really did have any impact.

Getting started is relatively simple: charge up the unit, and pair it over bluetooth with your phone. There are plenty of videos that will show you the correct way to wear the wraps to make sure you are actually getting the best out of the device.

Positioning of the electrodes is the most important thing. If they aren’t positioned in the right spot on your thighs, the session won’t be as effective because you won’t be hitting the right muscles. At worst, you’ll end up with muscle cramp if it’s too close to the inside of your thigh.

Then you can get going with the device – carefully, I’d advise. The first session with BionicGym was an eyeopener. Literally. If you think this will be an easy thing, it’s not – at least not if you are expecting a huge difference in a short space of time. I’ll admit I got a bit cocky and when I pushed the intensity up to 10, I thought it was too easy. It was – BionicGym goes up to 100. At 20 it was okay, at 27 it was uncomfortable, and at 37 I felt like crying. That was the beginner levels; I’m on the short side so the wraps are stimulating practically my entire thigh. It certainly takes some getting used to, and BionicGym advises you to build up the intensity gradually. Take that advice.

You can use it up to about level 30 while sitting down; after that you’ll have to stand because the pulses contract your muscles so much it’s like the worst case of restless leg syndrome you’ll ever have. Between level 25 and 30, members of my family refused to sit next to me on the sofa, because it was distracting.

The app is a work-in-progress, but it does the job. You have several workouts already available and more can be added in the future. While I was testing BionicGym, the company released the Pro workouts, which are more intense than the regular ones, and there are high-intensity interval training sessions due to be added soon.

If you have an injury that prevents you from doing your regular exercise, BionicGym could be a solution

The obvious question would be: why do you need it? Couldn’t you just go for a run, or do some exercise at home? Aside from the fact that, at low levels at least, it can be used anywhere so you can add exercise to almost every part of your day if you really want to, the BionicGym is very portable, so you can take it with you if you travel. In the past month I’ve used BionicGym mainly at home, but also while in work (at low intensity so no one thought there was something wrong), on a long-haul flight (I was very, very bored), in hotel rooms and on the bus to work. You can also add it into regular workouts to increase their effect without adding to the impact on your joints etc.

It’s not just about squeezing exercise in, though. If you have an injury that prevents you from doing your regular exercise, BionicGym could be a solution – depending on the injury, of course.

But what you really want to know is: does it actually work? Well it certainly raises your heart rate – an Apple Watch, a Samsung Galaxy Watch and a Polar heart rate monitor all back that up – and it certainly makes you sweat. I feel fitter. But don’t take my word for it. The test showed an improvement in my fitness, a reduction in my body fat and a reduction in overall weight. The latter two could be influenced by changes in diet – not that there were many – but the improvement in recovery post-exercise was a surprise. Is it down to BionicGym? Possibly.

Of course there is more to exercise than just heart rate, especially if you plan on running a marathon. So there are definite benefits to keeping up running or adding weights into your routine rather than relying on a machine and an app to look after your fitness.

The good:
Easy to set up and get started with, and, as your fitness level increases, you can up the intensity or opt for the targeted workouts.

The not-so-good:
It can be uncomfortable, especially in the early sessions. The workouts can’t be customised right now, so you have to use what’s there – although there are plenty of options. Also, it’s not cheap.

The rest:
The company can add new workouts to the app as it develops them. At present, there are targeted workouts for your quads, calves and glutes, along with the general workouts at beginner and pro levels.

The Verdict:
It wouldn’t replace all exercise but it might help when you can’t fit it all in. Based purely on my own results, it has had an effect.