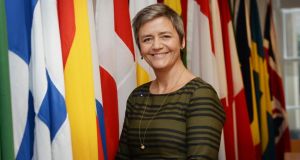 European commissioner for competition Margrethe Vestager: “When you become big, you have a special responsibility not to use your muscle to deny others the chance to compete against you.” Photograph: Alan Betson

“I think if you bitch a little bit every day you will end up divorced.” This is how Margrethe Vestager, the European Union’s competition commissioner, explains Brexit.

Not simply a British strain of populism, but the culmination of a long, unhappy marriage, fuelled, she says, by a deep-seated Euroscepticism on one side.

It sounds unsympathetic, but the straight-talking Dane, the inspiration behind the television series Borgen, says she is deeply saddened by the split and describes the night of the referendum result as a low point in her career.

This is as close as you’ll get to an admission from a senior Brussels official that the project, now riven with splits on immigration and stalked by anti-establishment forces everywhere, has failed in a vital element of its mission.

Vestager, (pronounced Vest-ayer), could perhaps claim to have fought a successful rearguard action against this populist backlash in her pursuit of US tech giants Apple, Google, Facebook and Amazon, for antitrust violations and breaches of the tax code, a David-and-Goliath struggle that plays well with the public.

“The [European] Commission has changed. We do our best to legislate less and enforce more, ” she says.

Vestager has smashed every fine-setting, back-tax chasing record in the book in her bid to rein in the dominance of these firms.

Since 2014, she has hit Google with more than €6 billion in antitrust penalties, ordered Apple to pay €13 billion in back taxes, fined Facebook over its WhatsApp acquisition, and is now investigating Amazon for monopolistic behaviour – cases that have struck fear into Silicon Valley while drawing the ire of US president Donald Trump.

“Your tax lady, she really hates the US,” Trump is reported to have told Vestager’s boss Jean-Claude Juncker, whom she is tipped to succeed as commission president next year, in a recent meeting.

Vestager is in Dublin on a two-day visit to participate in a citizens’ dialogue with students in Trinity College and to receive a gold medal from the university’s Historical Society in recognition of her regulatory work.

She says we are probably “too close to the canvas” to adequately understand the populist currents coursing through European politics at the moment.

Ironically she sees the solidarity and resolve of the EU 27 in the Brexit negotiations as a template for how things should be done at a European level. “A small silver lining,” she calls it. It seems a pity to be finding the right template right at the point of rupture.

The EU’s unity around Brexit also stands in stark contrast to the bloc’s fractured stance on immigration and its less than co-ordinated handling of the sovereign debt crisis.

She insists the EU is “unwavering”, however, in its support for the backstop clause element of the Brexit withdrawal agreement, which protects the island from a hard border – a red-line issue for Dublin but a black hole for Brexiteers.

She also believes removing it or watering it down would not break the current logjam, so entrenched are the positions in Westminster, a view that is widely shared in Brussels.

Vestager grew up in the small town of Olgod near Denmark’s windswept west coast. Her parents were Lutheran pastors – Theresa May and Angela Merkel also had clerical parents – who instilled a strong sense of civic duty in her.

She inhabits the left, liberal strand of the political spectrum and was a former leader of the Danish Social Liberal Party, now in opposition, which puts her reappointment to the commission in doubt. Despite her low-key demeanour she doesn’t shy away from confrontation and is known to be a formidable interlocutor when provoked.

Oh to have been a fly on the wall at her meeting in January 2016 with Apple boss Tim Cook about company’s tax arrangements. It took place several months before the commission slapped an eye-bulging €13 billion tax bill on the company.

The money now rests in an escrow account set up by the Department of Finance here pending an appeal by both Apple and the Irish Government.

The ruling was described by Cook as “political crap”, a reference to the notion that Europe, while steadfast in its pursuit of US tech firms, has been less than thorough in policing its own industries such as the automotive sector, which has been embroiled in cartel-style collusion to fix diesel emissions.

She is used to this charge. It is levelled in every interview. “When I look at my statistics I don’t find that,” she says, listing off the various tax cases taken against European firms, most recently against Swedish furniture giant Ikea.

“And that’s just in the state aid area. If you look at our cartel prosecution you’d find a picture that is very mixed. It’s about laws being broken and not the flag you’re flying.”

In the case of Apple, she says: “State aid may come in terms of grants, money, cash, a subsidised loan, a cheap building lot, a tax benefit, so there was no secret about that.”

“What was a secret was how Apple had organised themselves and it was the US Senate questions that allowed my predecessor [Joaquín] Almunia to start the Apple case and for me to take it from there and finalise it.

“These are not fines, they are unpaid taxes,” she says.

But does she have sympathy for Ireland’s position stuck as it is in the middle of this power struggle?

Vestager also claims the Google fines arose from US firms complaining about the company’s behaviour. “Some of these companies make more money in Europe than they do in the US,” she says.

“The reason why the US tech companies – Google, Apple, Facebook, Amazon – are big in Europe is because people like their services and that is perfectly fine. We may have a lot of things in Europe but we have no ban on success.”

“However, when you become big, you have a special responsibility not to use your muscle to deny others the chance to compete against you.” A neat summation of the regulator’s credo.

However, despite being at the central of a global outcry over privacy and the use of personal data and having a multitude of cases brought against it by state regulators, Facebook has so far escaped a full-scale commission investigation and sanction, barring a fine relating to its takeover of WhatsApp.

“We can only open cases when we have a suspicion something is wrong. What we’re looking at, at the moment, is Amazon’s use of data but we don’t have a Facebook case,” she says, while indicating the commission is closely monitoring actions being taken against the social media giant.

Interestingly Vestager has only a limited footprint on Facebook in deference to her children’s privacy, from their parents that is. Twitter is more her medium. There are photos from everyday work events, of meetings with various political leaders, and updates on the commission’s work.

She is a strong advocate for a digital tax, something Ireland, as host to most of the firms in the firing line, opposes. The EU proposal is for a new tax, levied at 3 per cent on EU-based digital sales.

Vestager says digital companies pay an average of 9 per cent in tax compared to 23 per cent by non-digital: “For me that’s a competition issue.”

“I side with the argument that says businesses should be contributing at the same level,” she says.

“As humans try to understand technology, corporate taxation should also understand how digital business models work . . . how value is created and what does it mean to have a taxable presence.”

She is optimistic about where things are going, noting the strides that have been made here and elsewhere in closing off loopholes and country-by-country reporting.

Vestager’s current tenure on the commission runs out this year but she is keen to be reappointed and to the same post.

“We’re in the middle of something,” she says, referring to the commission’s move to beef up regulation around tax, digitalisation and access to data. “We need to do more. I would be more than happy to take another mandate,” she says.

Failing another stint on the commission, she hasn’t ruled out returning to Danish politics, where she served as minister of economic affairs and the interior from 2011 to 2014. “I’ve been careful not to burn any bridges, because I like Danish politics,” she says.