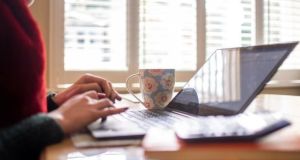 The number of people working from home has soared in recent months.

The number of people working from home, at least some of the time, has more than doubled since the introduction of Covid-19 restrictions, according to the Communications regulator, Comreg.

A new survey of over 1,000 people conducted by Behaviour and Attitudes on behalf of the regulator shows that 61 per cent of the workforce are currently working from home, as against 29 per cent in April.

Not surprisingly, this has led to a sharp rise in broadband usage with 77 per cent of survey respondents saying they were using the internet more, as against 61 per cent previously.

The number of people shopping online has risen 15 per cent since April while video calls have increased 8 per cent.

Most survey respondents expressed satisfaction with the level of broadband they were receiving, although those in rural areas were less happy.

Half of all respondents said they would be willing to spend more on broadband to get a better service with some perceiving a deterioration in quality during the lockdown.

This is likely due to increased volumes of traffic and a subsequent move by streaming services such as Netflix to temporarily reduce the quality of streams to limit overall bandwidth usage during the Covid-19 crisis.

1 Avoca warns of redundancies due to coronavirus
2 Coronavirus: We must save lives but we also need to live
3 Taxi app Free Now blames ‘technical issues’ for driver payment delays
4 Grounded Aer Lingus pilots develop fix for turnaround glitches
5 ufurnish: ‘It’s like Skyscanner, but for furniture’
Real news has value SUBSCRIBE