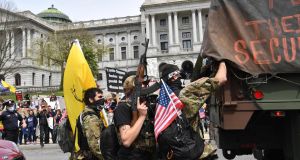 A “reopen” demonstration in Pennsylvania in April: Often, but by no means always, the “left behind” are white, older people without post-secondary education.

Before the pandemic struck it was commonplace to ask if our economies were chronically crisis prone.

The answer was generally in the affirmative: memories of the great financial crisis have barely faded and some of us either know our history or have lived through it.

Economies go up and down, sometimes by a lot, always with alarming frequency. While the pandemic can hardly be argued to have economic roots, it obviously has economic implications.

And the varying responses from different countries raise questions about governance that are linked to the ways in which we run our economies.

Populist, authoritarian demagogues are great at promises, excel at faux empathy with the people and are utterly useless at dealing with complexity.

States invested in the messy business of problem solving have done much better than others who devote considerable resources to devising headline grabbing slogans. “Make America Great Again” and “Get Brexit Done” did do a great electoral job but are now seen as mere media management exercises with zero content.

In fact, those slogans have proved costly, not just in terms of the governance resources that were devoted to their creation. The primacy of catch-phrases to the exclusion of all else has cost lives.

Crisis comes in many forms. I count three great crises of the modern age, but some historians will no doubt differ. From the 1970s onwards, many economies have mostly failed to deal with the economic, social and political consequences of deindustrialisation.

A decade ago we lived through an economic crisis spawned by a belief that house prices could never go down. Today, we have to deal with Covid-19.

The Financial Times’s Martin Sandbu has just published a book called The Economics of Belonging. It was written before the pandemic struck but is no less relevant for that.

It is a brilliant, if sometimes controversial, exposition of what ails our economies and political systems. His central thesis is that the rise of populism in general, and Trump and Brexit in particular, stem from a misdiagnosis.

Populism and its offspring, the culture war now raging in many countries, have, according to Sandbu, mostly economic roots. Those who focus on social or political causes are missing a deeper truth.

Sandbu points to the lamentable governmental responses to that wave of deindustrialisation that began four or five decades ago.

We know a lot about typical Trump, Brexit and Le Pen voters. They don’t comprise a monolithic body but do share many characteristics.

Often, but by no means always, the “left behind” are white, older people without post-secondary education.

Many of them suffered directly or indirectly from the disappearance of jobs in coal mining, car manufacturing, shipbuilding, steel and other manufacturing industries. Lack of secure, unskilled work caused most of our problems.

Sandbu argues that one misdiagnosis is the blame placed on globalisation. The belief that good, secure, reasonably well-paid jobs were shipped to China and other low-cost centres is wrong.

The finger of blame should rather be pointed at technological change. But that misdiagnosis has led to an anti-globalisation movement which plays to Trumpian trade wars, Britain’s act of immense self-harm and other examples of demagoguery.

It allows those who argue against immigration and the free-flow of people around the world to say “I’m not racist, but immigration is a consequence of globalisation so must be curtailed.”

Incumbent British and American authoritarianism stems from a belief that the culture war pursued with such alacrity will appeal to voters whose values stem from non-economic roots.

This values-based politics is another misdiagnosis: it ignores the real reasons why people who previously voted for Obama and were once solidly Labour suddenly switched sides. Those values must be pretty malleable. It’s the economy stupid.

Income and wealth inequality lurk at the heart of all of this. Britain and America did create plenty of jobs to replace the ones lost to technological change. But they tended to be in the lower productivity service sectors where pay is commensurately lower and employment often insecure.

Men still won’t do “women’s” jobs and vice versa. Too many people are immobile, both physically and psychologically.

The legal and social causes of that of immobility have to be tackled. As does the productivity – and therefore wages – of those service sectors.

We are, once again in crisis. It would be wrong to argue that it is all the fault of the virus. Many of our problems predate Covid-19. But the pandemic does represent opportunity as well as threat.

Change has to come and now is surely the time to address, radically, all of the issues we are faced with.

Ireland with its non-industrial economic history doesn’t have many of the problems facing other countries but has shown itself to be vulnerable to the populist plague. The pandemic mandates a macroeconomic response based on unprecedented borrowing and commensurate stimulus.

Heading off the populists necessitates an agenda that builds on our relatively good track record on inequality and deals with infrastructure, health, housing and education.

These problems are complex but solvable. That they are all not unique to Ireland speaks to their complexity. Beware populists who claim certainty – another misdiagnosis – about how to solve them.

Seize back the narrative that claims simple solutions. And then throw everything at a solution.