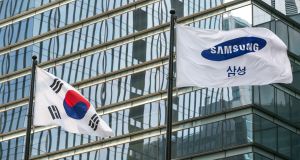 Samsung Electronics’ shares slid nearly 3 per cent on concerns that growth in chip demand may slow as the world emerges from Covid-19 in the second half of the year, outweighing a better-than-expected profit.

Sales for the quarter were 52 trillion won, according to preliminary results released Tuesday. The company didn’t provide net income or break out divisional performance, which it will do later this month when it releases final results.

The estimates include a one-time gain related to the display business. While the company didn’t offer details, some analysts estimated it could have recorded more than 1 trillion won in compensation from Apple for fewer-than-promised display orders.

Despite its strong topline numbers, Samsung shares closed 2.9 per cent down in Seoul on Tuesday, faring worse than the 1.1 per cent drop in the KOSPI.

Part of the negative sentiment may be explained by worries of a price decline in the key memory segment, where stockpiling orders in the current period might taper off.

“The market is concerned about a potential slowdown in server expansions. Memory prices could be weakening in the second half,” said Park Sung-soon, analyst at Cape Investment and Securities.

The Covid-19 pandemic has presented a silver lining for the tech industry in hastening the shift toward online activity such as video conferencing, web-based education and entertainment streaming, helping Samsung sell more chips in the quarter.

“Because of this work-from-home situation, there’s been strong demand for a couple of its products,” said Kiranjeet Kaur, a research manager at IDC. “The demand for DRAM has seen a spike in the second quarter due to demand in server and data centres.”

Although Samsung had warned of a profit slide in the second quarter due to plant and store closings, it managed to mitigate the fallout by cutting marketing expenses and selling TVs and monitors to people spending more time working and playing at home.

Samsung’s mobile and consumer electronics businesses took a hit from the closures since mid-March, but stores and factories began reopening across North America and Europe from June.

Hana Financial Investment forecasts Samsung will report around 5.5 million smartphone shipments for the second quarter when it releases its full breakdown.

While Samsung’s business appears to be weathering the virus storm, the company has another significant challenge to deal with in determining the fate of its de-facto leader, Jay Y Lee.

The company’s vice chairman is facing allegations of corruption in Korea that could lead to prosecution and a return to prison. – Bloomberg

1 MSD buys Takeda biologics plant in Dunboyne
2 State’s biggest landlord records 30% rise in rental income
3 ‘Saudi Arabia is where the opportunities will happen in future’
4 What will the office market look like after the great remote working experiment?
5 Facebook agrees Irish wind-farm deal with Brookfield in Tipperary
Real news has value SUBSCRIBE