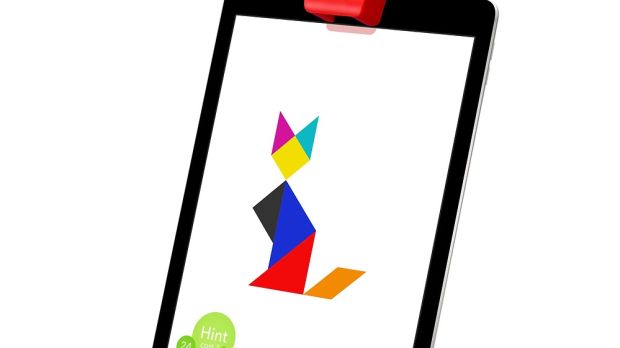 Because it’s age-linked, the games aren’t too complex, nor are they too easy

We all have great intentions about screen time. No more than 10 minutes at a time, perhaps, or limiting it to 30 minutes a day. And with good reason; although there are plenty of legitimate uses for tablets and smartphones, most parents prefer their children to get fresh air and more physical exercise than sit in front of a tablet all day.

But the coronavirus shutdown – for most people at least – turned all that on its head. Tablets suddenly became one of the most-used objects, at least in our house, thanks to Zoom interactive classes and school video calls. There was also slightly too much Disney+ and Netflix than was comfortable.

There is a balance to be struck, though. There are plenty of educational uses for the devices that don’t have to be mind-numbingly dull.

Osmo has a good line in hybrid games, where you use an app on the iPad but the game pieces are real world. That could be anything from letter tiles to make words to a detective set that includs maps and a magnifying glass. They manage to combine the best of both worlds, and in some cases are educational too.

The best place to start is the Osmo Genius Starter Kit (assuming your child is of the appropriate age of six to 10; there is a Little Genius kit for younger users up to five). That gives you what you need to get started – apart from the tablet, of course.

To use Osmo you’ll need an internet-connected iPad (or one of the compatible Amazon Fire devices) plus the appropriate stand and reflector for your device. The reflector is a small piece of plastic with a mirror inside that will direct your camera’s field of vision to the game surface. It’s easy to slide on, and when you are finishined with the game, it has its own spot in the stand for storage.

If you are new to Osmo, the Starter Kit is – as you might suspect – the best place to start. It comes with three game sets included: numbers, letters and tangrams. It also has the stand, which is an essential piece of kit. Not only does it hold your iPad, it also has a small attachment that will reflect your camera’s field of vision down to the table in front of you. On setting this up, I failed at the first hurdle by forgetting to attach the reflector, which meant the Osmo app couldn’t see a thing we were doing. As far as Genius Kits go, it turns out this one needed a smarter one in charge.

Once the reflector is installed correctly, the camera picks up everything on the surface in front of the iPad. The Starter Kit gives you a few options. Words and Numbers involve, as you would expect, work on completing words and maths puzzles. The tangrams kit works on spatial awareness.

The Masterpiece app turns the Osmo into an art station, giving your child a template to follow. All you need is a sheet of blank paper, and there is a list of preloaded images for you to copy. That’s not the the easiest to do, as you are watching yourself draw on the screen and trying to stick to the image overlaid on your sheet of paper, but a bit of practice improves your skills immeasurably.

As great as I think the Osmo kit is, it’s not really aimed at me. So I handed over the iPad to my five-year-old, along with the Genius Kit, and left her to it. The big test is how long it would keep her occupied (that is, quiet); the results were encouraging.

It’s safe to say she’s a fan. Because it’s age-linked, the games aren’t too complex, nor are they too easy. Plus when she completed the puzzles, there was a sense of achievement that spurred her on to the next one.

Once you have the basic kit, you can buy add-ons. For example, there is a special set of notebooks and marker for drawing everything from Mickey Mouse to Disney princesses, with Osmo guiding you through the process. Some of the game pieces can be used in other apps, such as the tangrams. That gives the system a bit more lengevity, allowing it to grow with your child rather than have it discarded for being too childish.

Is it worth the money? If you look at all the parts separately, you might think not. It’s a plastic base, a mirror and some cardboard and wooden game pieces. But it’s the software that knits it all together. And anything that can hold my child’s interest for longer than 10 minutes at a time – and isn’t passive consumption – has to be doing something right.

The Genius Starter Kit in itself gives you enough games to be worth the investment. The game tiles can be used in multiple games, in some instances, and there are different games for different age groups.

You can’t swap the bases and reflectors between iPad and Amazon Fire tablets; you can buy spares on the Osmo site, but they aren’t cheap. There are also a lot of reasonably small pieces to keep track of.

The Osmo kit works with almost every iPad and iPad Mini out there at the moment; it uses iOS 9, which means the second generation iPad and upwards is compatible. It’s not compatible with iPad Pro 11-inch and iPad Pro 12.9 inch, however.

There is an Osmo Parent app that alows you to track your child’s play and proggress on the various games.

he Osmo Genius Starter Kit is educational and fun – a good investment for those who want to keep their children occupied without feeling too much guilt over screen time.

Paying a price on inheritance when your aunt is not really your aunt?

‘I haggled over my apartment but I’m hardly going to do that at my local Lidl’ 00:00
Covid lands blow on Katie Taylor’s commercial business 16:38
Paying a price on inheritance when your aunt is not really your aunt? 15:42
New era of tax won’t end Ireland’s winning streak 12:26
Irish Life remains in the running to buy Davy 11:36

As reopening rolls on, there is a hidden boom in the Irish jobs market

Surface Laptop 4: Familiar on the outside, souped-up on the inside

Microsoft sticks with a winning formula with some upgrades, but more ports would be nice

If you’re not too concerned with colour or noise cancelling, these earbuds are for you

1 Ten of the most mysterious aircraft disappearances

5 The winners and losers of the pandemic